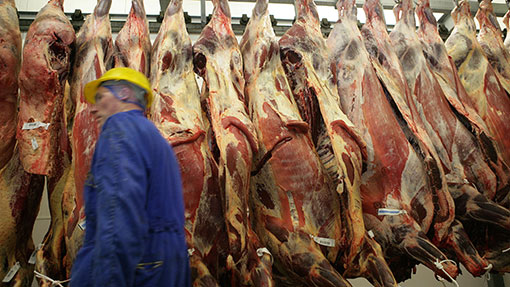 Farmers have vented their anger over falling beef prices at the Royal Cornwall Show, with both supermarkets and processors under fire.

NFU president Meurig Raymond said he had numerous complaints from farmers facing steep penalties for less-than-perfect spec animals during his visit to the show on Thursday 5 June.

“Over the past three months deductions to processors’ cattle grids have been forced on the industry without consultation or notice, and that cannot be right,” he said. Instead of deducting around 10p/kg from the base price for animals not meeting the R4L specification, farmers were instead losing 25p/kg or even more.

John Dracup, procurement manager at processor St Merryn Meat, confirmed that it was set to get tougher on low spec beef.

“Because other processors have done it we are going to have to do the same – but we will be writing to all our producers to let them know of changes coming in on 1 July,” he said. “We don’t have a problem with dairy-bred beef animals but we will be stricter on out-of-spec and lightweight cattle.”

Rising imports of cheap Irish beef, and supermarkets mixing it up with British beef on their shelves was another bugbear for farmers, said Mr Raymond.

“I get extremely worried when I see Union Flag banners with Irish beef on the shelves underneath. We’re only 12 months on from Horsegate and a lot of promises were made, yet now supermarkets are again sucking in Irish beef.”

Although beef supplies were currently high in the UK and Ireland, availability was set to fall later this year, he added. “I’d like to thank Waitrose and Dovecote Park for saying they won’t drop below 340p/kg because lower than that is unsustainable. And I’d urge other retailers to live up to their promises made last year, otherwise they won’t have cattle in 12-14 months time.”

One Cornish beef farmer, who asked not to be named, said he was losing money on every animal sold to Tesco. “This time last year we were receiving £4/kg – now it’s £3.12/kg,” he said. “Tescos says consumers are resistant to buying beef – so why were Irish beef imports up by 25% in March? It’s completely unsustainable.

“After Horsegate, I thought perhaps it was our turn – but we’re no longer the preferred customer,” he added. “British beef has higher provenance and assurances but now we’ve got to match the cheaper price of Ireland, which is a hub for EU imports. If you want provenance, you have to source closer to home. But after what’s happened you can’t give supermarkets the benefit of doubt and I certainly shan’t be investing my money in supporting Tesco’s share price any more.”

But Tom Hind, agricultural director at Tesco, said beef was clearly labelled as British or Irish. “We are not misleading customers. Over the past four years beef prices have risen significantly and that’s impacted on customer demand,” he said.

“The choice is beef versus other proteins, not just British versus Irish and we need to grow demand for beef again. We have a long-term commitment to build relationships with farmers and it’s going to take a long time to do that.”