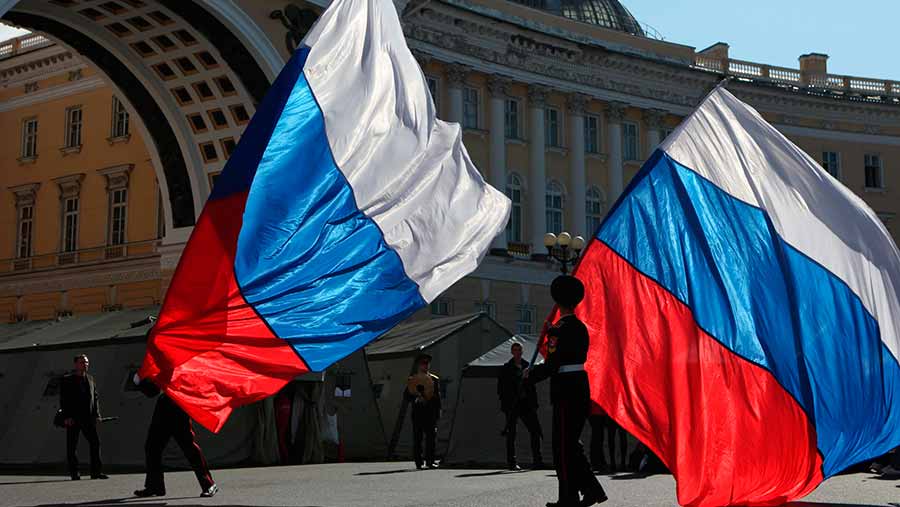 Farmgate prices in the UK and the rest of the EU are likely to be kept under pressure by Russia’s import ban until the end of 2017.

Russia’s Agricultural Ministry is understood to have started to draft a proposal to extend its ban of imported agricultural products from the EU and other countries including the US and Canada until the end of of next year, according to reports from Reuters.

The ban has been in place since mid 2014 as a retaliation to Western sanctions on Russia’s intervention in Ukraine and has contributed to the huge downturn in farmgate prices seen across the EU.

Access to the Russian market was worth €5.5bn (£4.2bn) annually to EU farmers before the ban, according to European farming union Copa-Cogeca.

The ban and its extension comes at a worrying time for the UK agriculture sector when the profitability of UK farming has fallen by a staggering 29% in 2015, a loss of over £1.5 billion Lucia Zitti, NFU chief economist

“The sectors most hit by the Russian ban are the dairy, pork, beef and fruit and vegetable sectors,” said a Copa-Cogeca spokesperson. “Pork prices are less than they were 11 years ago and milk prices over 40% below levels seen two years ago.
“We urge [EU] member states to ensure that aid from the package agreed last September is paid out as nearly 50% of it has not yet reached farmers.”

“We have felt the impact of the Russian ban indirectly in the UK through the inflationary effect on EU prices,” said Lucia Zitti, chief economist at the NFU.

“The ban and its extension comes at a worrying time for the UK agriculture sector when the profitability of UK farming has fallen by a staggering 29% in 2015, a loss of over £1.5 billion.

“This is the biggest year on year fall since the millennium and latest official statistics shows that farming profitability is at its lowest level since 2007, highlighting the cash flow crisis facing the agricultural industry.

A combination of higher production around the world, subdued demand due to slowing economies, the Russian ban and the strength of sterling in 2015 had led to more than 24 months of falling farmgate prices and a plummeting of profitability, added Ms Zitti.

“Any further downward pressure on farmgate prices can only exacerbate problems,” she said.

There have been signals from Russia recently however that it might be prepared to lift its ban on pigmeat exports from the EU if Brussels caves in to a list of demands, including removing its agricultural minister Alexander Tkatchev from the EU’s travel blacklist.

Russia is expected to send a list of demands to the EU in the next month.

Pig producers have been particularly badly hit, as a ban on swine from the EU has been in place since January 2014 following a small outbreak of African swine fever in wild boar on the Lithuanian and Polish borders with Belarus.

This had cost EU pig producers €5bn (£3.5bn) by the end of last year, according to the European Livestock and Meat Trading Union.