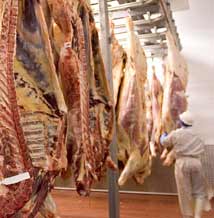 A move to “repatriate” promotional levies on livestock slaughtered in England from Scotland and Wales could see the combined income of EBLEX and BPEX slashed by almost £2m a year.

Quality Meat Scotland and Meat Promotion Wale are joining forces in a bid to have levies returned to country of origin. Stock from England slaughtered in Wales or Scotland would be similarly treated but the net gain to QMS is estimated at £1m while MPW would benefit to the tune of £700,000.

The move is expected to attract the support of the Scottish Government and Welsh Assembly and is on the agenda for a meeting of agriculture ministers from the devolved administrations in Wales later this month.

“Levies are collected and distributed according to place of slaughter, which means Scotland and Wales receive less levy money than if the approach was based on where stock originate,” said QMS chief executive Uel Morton.

“The Radcliffe Report left the door open and we believe the matter has to be readdressed to ensure a fair and equitable distribution of levy income.”

QMS is seeking a 20% increase in levies on cattle, sheep and pigs from next April after incurring a loss of £159,266 in the year to 31 March and a £500,000 reduction in levy income over the past two years as a result of reduced livestock numbers in Scotland.

But the move to grab levies from England is expected to attract a hostile reception from the Agriculture and Horticulture Development Board who collect levies on behalf of the promotional organisations.

“I see no significant levypayer advantage for Wales, Scotland or England in pursuing this approach,” said AHDB chairman John Bridge. “It is clear to me that the movement of cattle and sheep in this country is a complex issue and adopting anything other than the current approach can only add cost and complexity to the levy collection process.

“When the levy collection system was reviewed and agreed by Ministers in 2007, it was felt that point of slaughter was a fair way to calculate the three-way split. More importantly, it was regarded as the simplest and lowest cost method which was best for all levypayers.”

Mr Bridge said he acknowledged that cross-border movement was a matter which should “probably” be reviewed from time to time but not as a knee-jerk reaction to local funding issues.

The current levy collection system at point of slaughter is enshrined in the Statutory Instruments which govern how the promotional organisations operate and any change would require agreement between Defra and the devolved administrations in Scotland and Wales.

EBLEX has no plans for a levy increase in England having achieved costs savings following their amalgamation into AHDB.

Since the last levy increase in 2001, prime stock values for all three species in Scotland have increased by 58%.

Levy income has fallen by £500,000 over the past two years to an estimated £3.7m as a result of reduced livestock numbers and has been further eroded in real terms by inflation.

A series of meetings with farmers to discuss the proposed levy increase is planned in November and QMS chairman, Donald Biggar, is confident both producers and processors will back the move.

“We are now at a crossroads in terms of balancing QMS income from levy with our ability to effectively deliver for the red meat sector,” said Mr Biggar.