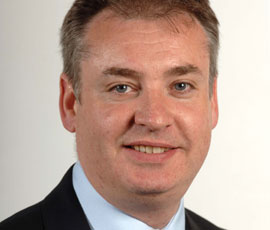 An independent Scotland would bring farmers a bonus of over £1bn in extra payments from the EU, the Scottish Government’s rural affairs secretary Richard Lochhead has claimed.

In a rallying call at the Scottish National Party (SNP) conference in Inverness, Mr Lochhead – who is a member of the party’s “referendum cabinet” – insisted independence made “economic, democratic and common sense” and accused successive Tory and Labour governments of acting against Scotland’s interests.

“They have left Scotland stuck at the bottom of Europe’s league for rural development funding and with the fourth lowest level of farming payments in the whole of the EU,” he stated.

Mr Lochhead said that, as a member state, Scotland could negotiate on rural and farming issues in its own right, “influencing the agenda, pursuing priorities and working with European colleagues on the big issues of the day”.

“This is my fifth year of attending EU meetings to represent Scotland and I can tell you there is much warmth and affection for the country. Europe will welcome an independent Scotland to the top table with open arms.”

“The EU is proposing to help countries that have received poor financial deals in the past close the gap in the future. Now that’s what I call a good reason for Scotland having its own place at the top table in Europe.”

Mr Lochhead added that Scottish food sales had increased by a third since the SNP took office in 2007. Food exports had increased by 50%, in four years and have passed the £1bn mark for the first time, he said.

He attributed the success to the SNP’s doubling of Scotland’s food and drink budget to more than £14m.

But a political aide was left to explain how Mr Lochhead had arrived at the £1bn benefit to farmers.

“Although it’s not clear exactly how this would work, Scotland could stand to gain significant sums if it was a member state,” the aide said.

“Some estimates put this at between 150 million and 200 million euros per year once the mechanism had been fully phased in. Therefore in only a few years this could reach a total of around £1bn,” he said.