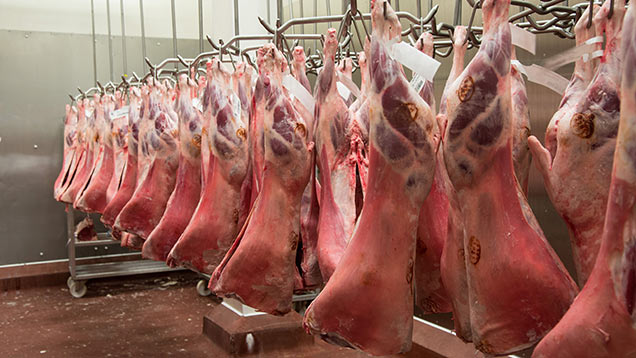 Sheep sector leaders have formally asked the government to change the “costly” rules on carcass splitting.

Rather than the mouthing system, sheep sector leaders want to use the 30 June each year as the cut-off, with lambs slaughtered after that date split for their spinal cord to be removed.

TSE regulations are EU-wide and require countries to removal spinal cords from animals that are either more than a year old or have one permanent incisor.

Representatives have been lobbying on this issue for several years, claiming the current rules cost abattoirs and markets money on checking and make the supply of unsplit carcasses more uncertain.

More than 30 groups, including processors, auctioneers and levy boards, met in February to debate the changes and now the NSA and NFU have gathered enough support to write to the government.

NSA chief executive Phil Stocker said switching to the calendar system in the UK could lead to immediate gains.

“Despite there being no evidence of BSE crossing species from cattle to sheep in field conditions, nor evidence that scrapie poses any risk to human health, TSE regulations were brought in as a ‘precautionary measure’ and any change, however minor, is met with resistance from Europe,” he said.

“In discussion with French importers, we have heard that such a move would be favourable to our exports.”
Charles Sercombe, NFU

NFU livestock board chairman Charles Sercombe said the changes would be important for exports.

France, which buys more than half of British sheepmeat exports, wants unsplit carcasses, he said.

“In discussion with French importers, we have heard that such a move would be favourable to our exports,”

Mr Sercombe added: “We believe this will also pay dividends when it comes to extending our red meat exports beyond the EU.”

Farm minister George Eustice will now discuss the proposed changes to the UK’s interpretation of the law with Defra and the Food Standards Agency.