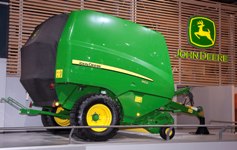 John Deere has unveiled a radical new range of variable chamber balers.
Built at the Arc-Les-Grey factory in France, the new 900 Series has what Deere calls a Fast Release System, which adopts a curtain design which replaces the conventional door system.
The fullframe design does away with the fixed wall concept and allows pressure to be increased during bale formation for higher density bales and released when the driver discharges the bale. Instead of the 20-30 seconds it usually takes to unload a bale, says Deere, it instead takes just 5 seconds.
The company reckons that the new design will save up to an hour a day when baling and that the increase density possible with the new chamber will mean less handling and easier transport.
Two models will be available, the 960 which produces bales in diameter of 80cm to 160cm and the 990 with diameters of 80cm to 185cm.
The new hitch has five rows of tines (the previous models had four) and is available with 13 or 25 knives.
The 960 and 990 will be available with Tractor Implement Automation.