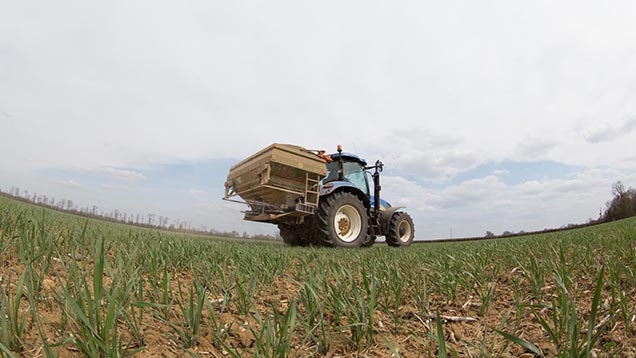 Fertiliser trade remains slow with growers reluctant to commit and sellers issuing their seasonal warning about delivery challenges in spring.

July and August saw a 30% drop in the tonnage of nitrogen delivered to UK farms, said the Agricultural Industries Confederation.

Part of this fall will be accounted for by expected changes in cropping on the back of CAP reform and changes in relative returns from different crops.

GrowHow’s recommended retail price for ammonium nitrate for November farm delivery is £278/t for full loads, a £3/t increase on the October price.

Product is mostly going on to farm at £270-plus, while urea is at £280-285/t for November and December and in some cases through to January. With trade described as merely ticking over, volumes are expected to rise towards Christmas.

“I wouldn’t push growers to get booked up just now but probably by the end of the month,” said broker Luke Paterson of Paterson Ag. “People have to start thinking about it especially for those first dressings – January could be too tight.”

Mole Valley Farmers’ fertiliser manager Paul Longman said that trade could become aggressive in the short term because of the lack of volume. “But if we see no real volume then we could see a squeeze in January. No one is really pricing out beyond December.”

Gleadell fertiliser manager Calum Findlay warned that product could not be delivered all at once to meet a sudden increase in demand.