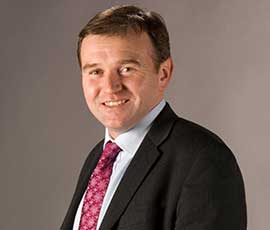 The Scottish National Party has called for clarification over the apparent downgrading of the role of farm minister.

Mr Heath, who was axed after just one year as farm minister, had carried the title of minister of state for agriculture and food.

However, Mr Eustice has been given the junior rank of parliamentary under secretary of state for Natural Environment, Water and Rural Affairs.

The UK government website claims the titles are under review.

Former farm minister Sir Jim Paice, who himself was controversially fired and replaced by Mr Heath in a Cabinet reshuffle last autumn, said the removal of a ministerial rank from the DEFRA farming role raises serious questions about how seriously the government views agriculture.

As Mr Eustice visited Peterhead harbour on Thursday (24 October) with the new Scottish secretary of state, Alistair Carmichael, the SNP called for an explanation on Mr Eustice’s role.

Commenting, Banff and Buchan MP Eilidh Whiteford, the SNP’s MP for Banff and Buchan, said: “It would be helpful if George Eustice would provide some clarification on his new job title and tell us if, in fact, his position has been downgraded following the reshuffle.

“DEFRA represents Scotland in important EU negotiations on Common Fisheries Policy and so it is worrying if the ministerial position has been downgraded.

“Scotland is a fishing nation, and we need to be adequately represented. Former DEFRA minister Sir Jim Paice has raised concerns that the role appears to have been downgraded.

“The new Scottish secretary of state should also shed some light because already Scotland is being short-changed – we are not represented in the European Commission and at present, Scotland’s fisheries minister requires a permit from Westminster to attend EU meetings.