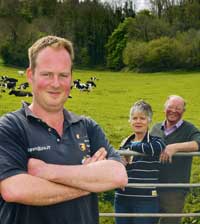 Bringing in a new business partner is a big step for any farm. Suzie Horne examines the best way to go about it

When is the right time to bring in a new partner?

But you should only bring in a new partner if you are sure that person is mature enough and you are genuinely willing to let go so that he or she can take a share of responsibility and capital.

“To introduce a partner who has no say can quickly lead to frustration and potentially to a dispute.”

Longer-term plans should be considered at the same time. For example, will other family members become partners in future? Should provision be made for those who will not be part of the business?

“Partnerships operate on the basis of good faith. There are no hard-and-fast rules as to when someone should become a partner. It should be when it will benefit the future of the business,” says Mike Butler, head of rural services at accountant Old Mill Group.

The financial consequences of a failed partnership can be as serious as those of a matrimonial split. The fundamental characteristic of a successful partnership is a desire to work with the other partners in good faith for the benefit of the partnership. Entry qualifications include:

“Working together extends to spouses, who have a significant influence on a partner’s ability to work in the business. Relations between spouses of partners are important, so any issues must be dealt with before an invitation to partnership, rather than trying to sort things out afterwards,” warns Mr Butler.

What do we need to do first?

“Sit down with your accountant and check that it all stacks up financially, then reflect on the idea,” says Mr Williams.

“If you want to go ahead, you will need to involve your lawyer and your bank manager. If you are a tenant, check the terms of your tenancy very carefully for rights to share occupation. This is most likely to be an issue in FBTs. For traditional tenancies, look at succession rights and whether those you are bringing in will meet the requirements.”

Whether land is to be a partnership asset or held separately outside the partnership and let to it is an important issue, he adds.

What are the main tax considerations?

There may be inheritance and capital gains tax implications, especially if large interests in capital assets are being gifted. This must be considered carefully in the early stages.

Entering partnership often means a move from employed to self-employed status. Rates of income tax are the same for both, but there will be small advantages such as running partners’ cars tax-efficiently.

However, National Insurance payments for the self-employed generally compare very favourably with rates for the employed.

Partners take income from the partnership business under whatever terms the partners agree. This can be varied from time to time.

“Profit shares dictate the taxable profits assessed on each partner. You need to reconcile the profit split with the situation of each partner. But there is scope to adjust profit shares, which may benefit an individual’s tax position,” says Mr Butler.

For example, a junior partner taking a modest profit share may then be able to take advantage of claiming child tax credits.

HM Revenue & Customs must be notified when a new partner joins and certain tax elections need to be considered.

Do we need a written agreement?

If you have an agreement, this is a good time to review it. Getting things right now can avoid a lot of heartache and expense later, when there is a death or dispute.

If you don’t have an agreement, or if it is silent on an issue, then matters will be decided by the terms of the Partnership Act 1890, which may not provide the best outcome for the family or the business, warns Mr Williams.

Partnership agreements should be reviewed annually, or at the very least every three years, he says. Partners should make wills, which must be reviewed on the same basis, remembering that a marriage revokes an existing will, unless it was made in anticipation of the marriage.

Does the new partner have to be given a stake in the business?

“The common misconception is that individuals entering into partnership suddenly become entitled to fixed lumps of capital or an interest in the freehold property of the business,” says Mr Butler.

“The land and property may not be owned by the partnership at all and even if it is, entry does not automatically entitle a new partner to any interest in property unless the existing partner makes a gift of a share to the new entrant. This would need to be formally recorded and recognised within the partnership agreement.”

Partners are generally not required to introduce working capital on entry, but are often required to build up a partnership base by restricting the amount they draw initially out of their profit shares.

For partners entering at lower levels, they may at first take a lower share of profits in return for taking a more guaranteed fixed initial share of capital.

How long does the process take?

Between three and six months, says Mr Williams, although it can be longer if there are complicated tax, land ownership, or security issues.

What causes the most problems?

“Money and ambition,” says Mr Williams. “The business will often run smoothly, but as the partnership grows the business may be pulled in different directions.

“Expansion, diversification and consolidation are frequently causes for debate. Similarly, capital released from the sale of development land or acknowledging that the business can no longer support the families involved are also contributing factors.”

This highlights the value of a solid agreement providing a means to resolve issues such as how a decision might be made to sell land or change the direction of the business.

Anything from £1000 to £20,000-plus if there is a need for valuations, re-mortgages, a complicated agreement or tax advice, perhaps a new tenancy agreement and land registration. 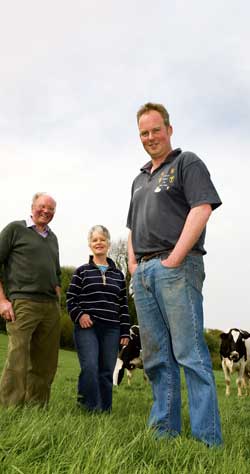 Trust, communication and shared ambitions are key elements to making the partnership work at Langford Green Farm near Bristol.

Patrick and Nicky Parsons asked their son William (right) to join the partnership in 2002 when he was just 22 and returned home after a degree at Seale Hayne. He had also spent time working in New Zealand and on other farms in the UK. William’s sister Sarah has a non-farming career and lives in Northumberland.

“I did everything I could to try to dissuade him from becoming a dairy farmer,” says Nicky. “But he was so determined that this was what he wanted to do. Making him a partner would give him that extra drive and in any case we wanted him to be part of the business.”

William had plenty of enthusiasm and drive, as well as some new ideas, valuing the experience he had gained on other farms. “It opens your eyes to see how things are done elsewhere and I would recommend working away from home for a while to anyone,” he says.

“You need 100% enthusiasm because when you’re a partner, it puts that extra responsibility on you. If something needs doing, you have to get it done.”

The farm had 70 cows and needed to expand when William joined. They now run almost 140 cows on the tenanted unit, rearing all their own replacements and could expand a little further without needing to employ full-time help. Cropping is all geared to providing feed for the cows.

Decisions are made jointly and even if a little persuasion is needed sometimes, agreement is always reached. William lives on the farm, but not with his parents, which he says is probably helpful. The three partners have a routine of breakfasting together every day, when both day-to-day and bigger issues are discussed.

“My parents are very trusting and everyone discusses everything. Dad is very keen and open-minded about new ideas, but I’m not one for changing things for the sake of it. Litres in the tank is the priority, whether that’s through more cows or otherwise.”

New cow housing and changes to cubicle management have brought benefits to the business since William joined.

“Not all of the changes would have happened if it hadn’t been for William,” says Patrick. “You’ve got to let them bring new ideas. It’s no good saying ‘we did it like this so that’s the way it is’. We would probably have taken a slightly easier route, maybe not had so many cows, but I knew he would make it work because his heart is in it. We are lucky in that we all get on so well.”