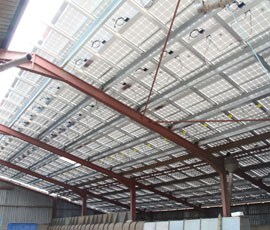 An Oxfordshire farmer has become the first in the UK to replace two complete asbestos barn roofs with solar photovoltaic panels.

The two “energy roofs” at John Woolcock’s Chadlington farm cover a total of almost 700m2, with peak outputs from the Sharp panels of 54.72kWp (kWp = kilowatt peak, the panel’s highest output in the strongest sunlight) and 45.18kWp.

The Solarcentury system cost around £2.85-3.10 a Watt to install (just under £300,000 in total), but Mr Woolcock said the forecast annual income and electricity savings of £31,000 meant that it should pay back in around eight years – assuming 9% grid electricity price rises and index-linked Feed-in Tariff payments.

“Solar makes complete economic sense with its 8% return on investment,” Mr Woolcock said. “But why would you want to bolt solar panels onto an old barn when you’re making such a financial commitment. We’re really pleased to have been able to update our buildings with roofs made entirely from solar.”

Solarcentury said “energy roofs” were already being used on agricultural and industrial buildings elsewhere in Europe, but this was the first in the UK to benefit from the FiT.