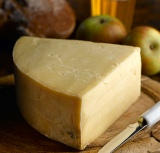 A piece of cheese has been recovered intact after an attempt to launch it into space.

The 300g wedge of farmhouse cheddar was handed to police on Wednesday evening in Cressex, Buckinghamshire.

It landed in a back garden less than 80 miles from the launch site in Wiltshire where the record attempt had begun early on Tuesday 28 July.

Members of the West Country Farmhouse Cheesmakers, the team behind the attempt, were jubilant at the recovery and said they intended to enshrine the cheese at headquarters.

They were convinced the mission had been a success pointing to the fact that the weather balloon, used to transport the cheese, had burst as planned.

This, the group said, was evidence the balloon had reached the projected height of 18.5 miles where it swelled and ruptured in the diminishing air pressure.

However, doubt surrounds that claim.

Vital information which should have been provided by a GPS system and a video camera has been lost after both pieces of equipment failed.

The group which buys all of its milk from local dairy farmers, rewarded the woman who found the cheddar with a cheese selection.