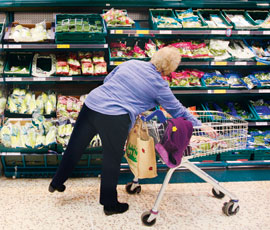 The government has agreed extra measures so farmers who complain about unfair practices by supermarkets will remain anonymous.

After a decade-long campaign by farm leaders, a Bill to set up the new Groceries Code Adjudicator was finally published in the House of Lords on Friday (11 May).

It includes measures allowing trade associations such as the NFU to lodge complaints about supermarkets on behalf of farmers wishing to remain anonymous.

The new body is being established to enforce the grocery supply code of practice after the Competition Commission identified competition issues in their 2008 market study.

In particular it concluded that the market dominance of big supermarkets led to some suppliers being treated unfairly in the UK and overseas.

Establishing an adjudicator aims to beef up protection for farmers and ensure that large retailers treat suppliers fairly by lawfully adhering to the groceries code.

Business minister Norman Lamb said supermarkets would still be able to secure the best deals and to pass the benefits on to consumers. But they should also treat farmers fairly.

“This means paying them on time or not being able to scrap arrangements with farmers and suppliers at the drop of a hat,” said Mr Lamb.

“I have also responded to concerns from the select committee and others that trade associations should be able to complain to the adjudicator and have amended the draft Bill to provide for this.”

Rogue retailers face being named and shamed. But the government has stopped short of giving the adjudicator the power to issue fines – at least initially.

“The food industry is vital to our economy and this government is committed to ensuring that all sectors of it are able to thrive while providing the best value and quality for consumers.”

NFU president Peter Kendall said news that third parties would be able to make complaints on behalf of farmers would bring huge relief to union members.

“After years of campaigning, this announcement will be welcomed by suppliers and producers who, for too long, have been subjected to unfair practices by the major supermarkets.

“While some retailers have taken steps to build stronger relationships with suppliers all too often the pursuit of short-term financial performance leads them to abuse their market power.”

Mr Kendall added: “Our main concern now is that the Bill becomes law at the earliest opportunity and receives proper but swift scrutiny as it passes through Parliament.

“The grocery supply code of practice has been in force for over two years – essentially a rulebook without a referee.”

The British Retail Consortium has warned that third party complaints would open retailers up to malicious campaigns.

The Bill should be to keep it as simple and fair as possible, in the interests of customers and all companies involved, said BRC food director Andrew Opie.

“The adjudicator should only be able to pursue specific complaints from suppliers which have direct relationships with the retailers, and which are related to the groceries code.”

The Bill will begin its passage through Parliament in the coming weeks.