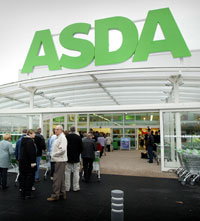 Two of Britain’s biggest supermarkets have announced schemes to encourage the reduction of greenhouse gas emissions from their farmer suppliers.

Asda has become the first retailer to sell a brand of low carbon beef, while Sainsbury’s has extended its dairy carbon reduction scheme to cover farmers who supply beef, lamb, pork, poultry and eggs.

The Asda low carbon scheme uses dairy bulls reared for 9-11 months, instead of the standard 24-month beef. The bull calves are classed as a by-product of milk production, so the carbon dioxide emitted is offset against the existing dairy farming process. Because the calves are also slaughtered earlier, the carbon footprint is said to be over a third lower than standard 24-month beef.

“We wanted to create a low carbon beef that was both accessible to our consumers and viable for our farmers,” Asda’s agriculture development manager Pearce Hughes said. “Should the product prove successful, we could extend it into our ‘Respectful’ low carbon range of free-range eggs.”

Meanwhile, Sainsbury’s decision to extend its carbon reduction programme to other meat and poultry suppliers followed the success of the scheme with the supermarket’s 325 dairy farmers, who reduced CO2 emissions by over 5000t during the last year.

The savings were achieved by using a tailored carbon foot printing model to highlight areas for improvement, such as energy use, grass conservation, manure storage, feed usage, housing and water recycling. The same model will be used by other suppliers.

One Sainsbury’s Dairy Development Group farmer, Robert Reader, had just completed his second annual assessment and was delighted to have made significant improvements.

Electricity supply was changed to a dual tariff, Passive Infrared sensors were put around yards and photo electric cells for lights inside buildings. Electricity usage was reduced by 17%.

“We also started to monitor the fuel used by our tractors and decided to change one of these tractors for a more efficient one,” he added. “This has cut down our fuel usage by 44% year-on-year. On top of this we monitored and planned the utilisation of our slurry and manure and have cut back on the use of artificial fertiliser by 15%.”