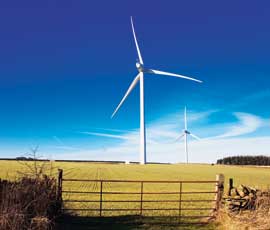 Farmers investing in medium-sized wind turbines or roof solar panels may have to wait longer than expected to see a return on their investment, and some may not even recoup the money at all. Robert Harris discovers why

Anyone tempted to offset spiralling electricity bills by generating their own power and selling the excess back to the grid must work through the tax implications carefully before committing, says Gary Markham, director of agriculture at accountants Grant Thornton.

“Many wind turbines and solar panels are being installed by people who are tempted by advertised returns before tax. However, when you look at the figures within a farming business, you get quite a different story.”

All too often, these headline figures ignore tax, he says. “In a domestic environment tax may not be an issue, but in any business, including farming, all the money you get from generating power – including the Feed-in Tariff (FiT) – will be added to taxable income.”

Although all additional diversification schemes are obviously subject to the tax rate applicable to the business, these types of project can easily be assessed on a stand-alone basis, enabling a detailed after-tax assessment to be made, says Mr Markham.

One of the most common areas of confusion at present is the availability of Enhanced Capital Allowances, he adds. These are only available for energy efficiency projects, rather than energy production, so cannot be accessed.

However, Annual Investment Allowances, currently at 100% on £100,000, and Writing Down Allowances at 20%, are available.

“Probably the worst scenario is to run the project in a farming partnership where the currently available Annual Investment Allowance has already been used for machinery purchases, and where the marginal rate of tax for the partners is 40% or 50%,” says Mr Markham. “In this situation the project is likely to have a net negative impact on the profitability of the business – in other words, it loses money.”

People trading as limited companies in their farming businesses fare a little better. Tax payable on profits up to £300,000 is 20% as from April 2011, which should mean more after-tax cashflow to repay capital, compared with a sole trader or partnership with a marginal tax rate of 50%. However, Annual Investment Allowances are likely to be already used in the farm.

“While the payback period may be quicker, there will be an additional tax charge on individuals to take any profit or surplus out of the company at a later date, amounting to an overall tax payment of around 40%,” says Mr Markham.

The ideal structure is a farming partnership that sets up a new limited company specifically for the project, he explains. The Annual Investment Allowance will be available, as will the lower tax rate, giving the project the best chance of success. However there are traps and pitfalls when there is more than one company involved, and shareholdings need to be carefully assessed, he warns.

Overall, once the figures are crunched, the viability of the project becomes much clearer, he says. “In most cases with a bit of thought and planning, you will still get a return, though it might be a lot smaller than originally anticipated.”

With a wind project, size and site are key. For example a large 250kW machine costing £500,000 sited on a windy hill in the north could produce an annual output of 500,000kWh, which works out at a capital cost of £1/kWh a year.

Where wind is less reliable, the picture can change quickly. Output from the same unit sited in lowland England with an average annual wind speed of 4.8m/sec falls to just 18,000kWh. The cost rises sharply to £3.33/kWh a year. “Prospects are not great – indeed, returns can easily be nil after tax,” says Mr Markham.

• Note: The government recently announced a comprehensive review of Feed-in Tariff payments, so rates may be subject to change in the future

When assessing the viability of any renewable energy scheme, farmers and landowners must also be wary of any implications for single payment and stewardship schemes, advises, ADAS rural economy consultant, Ruth Kendal.

“Land that is used to generate renewable energy maybe classed as non-agricultural. The single farm payment cannot be claimed on non-agricultural land and therefore farmers should seek advice on how renewable investment may affect their payments. This should be incorporated into the feasibility study and business plan.”

Similarly, if renewables are developed on land that is subject to a stewardship agreement and earns points towards this agreement, the eligibility for payments under these schemes may also be affected, she says.

It is also important to consider the financial implications in terms of the loss of income if land is removed from agricultural production – for example, what impact will this have on stock numbers or crop yields?

“One factor that must be considered, especially in a Nitrate Vulnerable Zone area, is what impact removing land from agricultural production will have on the availability of land to spread organic manures. If land is no longer available for spreading slurries will this result in a farm exceeding its nitrogen loading limits and not complying with the NVZ regulations,” she adds.

“It is too easy to get carried away by the headline figures of potential earnings quoted by renewable developers. A full assessment of all the costs and benefits to the farm business as a whole should be undertaken if a true picture of the financial implications of this investment is to be seen.”