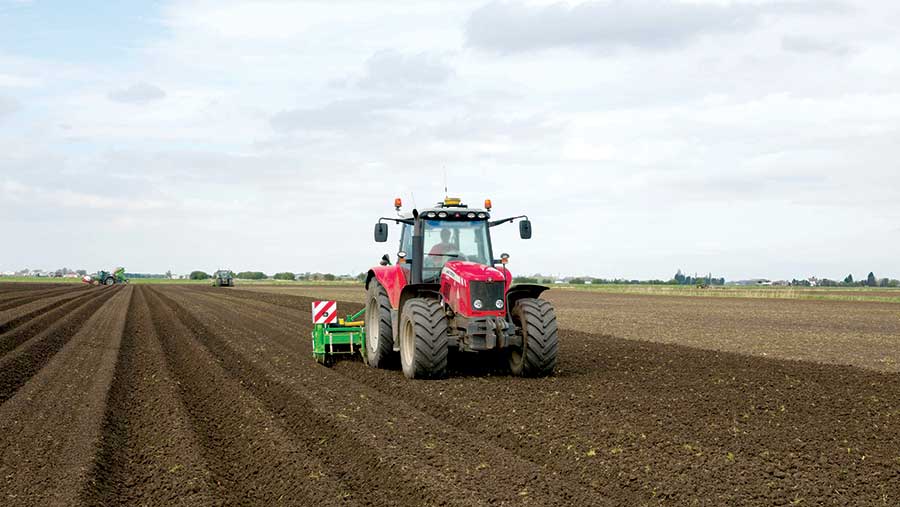 Herefordshire County Council’s rationale for selling off 1,940ha of its farms estate this year was that cashing in the £40m sale price would meet its needs better than its “negligible” income from rent in the longer term.

The estate brought in £439,900 in rent last year to cover all maintenance and administration costs, while the maintenance backlog tipped £2.8m.

Contrastingly, good management and buy-in from councils can pay dividends in the long term, he says. Cambridgeshire, for example, retains the largest farming estate in England, while Staffordshire is achieving an annual 7% increase

Cambridgeshire, for example, retains the largest farming estate in England, while Staffordshire is achieving an annual 7% increase on its investment in its farming estate. They stand out as success stories by concurrently meeting the needs of councils, farmers and taxpayers.

Farmers Weekly spoke to both to find out the key strategies to a profitable farming estate management plan.

While council farms have become synonymous with being the first rung on the farming ladder, councils are not obliged to provide opportunities for new entrants.

However, for both Cambridgeshire and Staffordshire councils, the right farmer is often a new entrant.

“It’s about ensuring we have the right farms which the right farmers want to farm in the right way,” says cabinet member for economic growth in Staffordshire, Mark Winnington.

Staffordshire has let 19 units to new starters since 2008 – 11 in the three years to 2016. Ten of those are also first-generation farmers like Mike and Laura Trayte (see “Forward thinking benefits tenants”, right).

Mr Trayte says the smaller 24ha starter units offered by the council were a very appealing alternative to the “big jump” of a 81ha private tenancy requiring a £300,000-£400,000 investment.

He plans to build up his dairy business before moving on.

A focus on new entrants also pays financially, says Hugo Mallaby, asset manager at Cambridgeshire council. “They come with the best ideas and will pay market-level rent. That helps with the ripple effect both in terms of ideas and rent, which does push itself out across the estate,” he says.

In the 12 months to March 2016, Staffordshire charged £300.92/ha on average – more than £100/ha more than Herefordshire. Focusing on tenants who have strong business plans and can pay a market rent obviously helps the long-term viability of a farming estate.

Progression for the best

Cambridgeshire Council even offers part-time holdings, but once farmers have proven their business model at this scale they need to progress.

“We have an estate which is large enough to have a broad range of holdings,” Mr Mallaby explains. “We also have bare land and we are able to let that to our better tenants to help their business grow.”

Both councils have replaced retirement and lifetime tenancies with shorter business tenancies to help stimulate churn and allow farmers to progress.

Mr Dunn says achieving churn is important to the long-term viability of the estate, but tenancies should last at least 10 years to allow farmers to bed in.

The maximum tenancy in Staffordshire is 26 years, split between a starter and progression unit at 10 and 16 years respectively. Starter tenancies are reassessed after six years.

“We consulted with all the tenants before we brought in the new tenancy lengths. Some of them weren’t happy, but one of the reasons we need county farms is to train young people and if someone is sitting on a county farm until their 80s, that’s not achieving anything,” says Mr Winnington.

On the whole the tenancy agreement structure has proved both popular and successful, with many farmers choosing to move on from the estate to other opportunities of their own accord.

Councils must expect to invest in their estates to provide the infrastructure farmers need depending on the use of the farm. This will also help allow rents to stay in line with the private sector.

“Where a tenant has an idea or request, if they can demonstrate they can afford that investment we are happy to do it. At the moment we are converting a farm shop on one site,” says Mr Mallaby.

Pursuing a programme of modernisation is also key to maximising returns by minimising maintenance costs.

In contrast, Herefordshire failed to ensure its assets were working to their fullest; instead, it was allowing buildings to “fall into ruin beneath tarpaulin sheets,” says Mr Dunn.

Herefordshire Council says the £2.8m backlog was accrued as the council has to prioritise all of its spending based on need and the rate of return.

“On this basis, it was not seen as beneficial to invest more money into the smallholdings,” it says.

The focus for council estates varies, but in Cambridgeshire it is firmly on producing revenue, says Mr Mallaby.

Cambridgeshire has moved away from capital receipts target – achieved by selling assets – but disposing of them at the appropriate time is still an important part of remaining commercially viable, he adds.

Land, farmhouses and buildings are assessed when they become vacant to see whether they should be retained or sold.

The same is true in Staffordshire. “If we have pieces of land that we feel aren’t meeting our criteria we will sell them off,” says Mr Winnington, adding the council has no targets.

But land will have development potential, which is one of the reasons the farm estate in Staffordshire has achieved long-term buy-in from the council. It has the ability to act as a “land bank” when the development need arises locally.

“There are times when we can use the land to help residents, such as the seven acres that went for a primary school, four acres for a cemetery, and two-and-a-half acres for a BMX track,” he says.

Councils are also able to use the value of the estates to borrow against if the need arises.

Where Herefordshire Council really fell down, according to Mr Dunn, was in getting political and budgetary support.

Achieving such buy-in is easier in counties with a strong agricultural focus. In Staffordshire, home of agricultural university Harper Adams, the need for starter farms is obvious.

“Five years ago we looked at the farms estate and asked: ‘Why have we got this?’ One reason is it is a brilliant training ground for new entrants into the industry.

“There are a lot of young people in Staffordshire looking for opportunities. With Brexit, that’s even more pertinent now,” says Mr Winnington.

In the end, against a backdrop of tightening budgets, whether an estate survives or not comes down to its financial outlook.

“We have proven on paper that council farms do pay for themselves,” says Mr Winnington. “It is tempting for any council to say we have this big black hole, let’s sell the farms and fill those holes.”

“Yes it’s an easy fix to sell the county farms off but you only get one bite of the cherry and if it’s wrong, that’s the end of it.

“We are very cautious, we look at all of the facts. If in the future things went wrong, we would have to look at it again,” he said.

An effective way to hold councils to account is for tenants form a group or association. In Peterborough, this approach helped persuade the council not to turn the farming estate over to a solar scheme. Members of the association are now helping the council draft a county farms policy.

What should prospective tenants ask before taking on a tenancy?

Make sure whatever you need to be able to run your business is nailed down in the contract, and that the council understands what your business will be doing. Ensure the tenancy framework legally allows your business to function in the way you expect if you have plans to undertake a specific type of non-farming enterprise.

How can tenants protect themselves?

Never rely on a handshake alone – get everything in writing. There are cases when councils have been forced to renege on promises, so written confirmation of the agreement will help protect your position. If a meeting takes place, send the council your notes on what you think was agreed and ask them to reply that they agree. 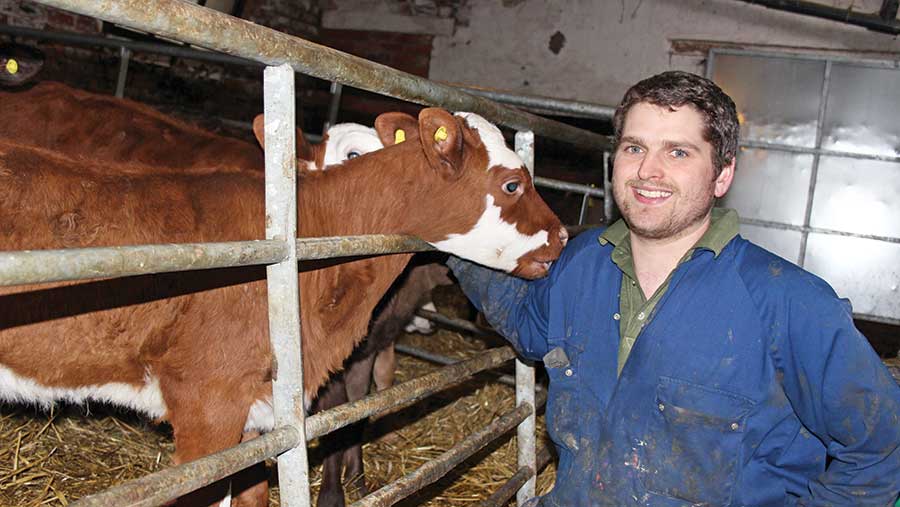 Mike and Laura Trayte leased 33ha from Staffordshire Council in 2015, and now milk 100 cross-breed cows on the farm.

These first-generation farmers started off in farming by owning a share-milking enterprise but say their lack of experience in running an entire farm played against them when they applied for their first lease in the private sector.

When the Traytes missed out on a Duchy estate to an ex-council tenant who had built up far more experience, it prompted them to take the same route.

Mr Trayte says that, in hindsight, taking on an 80ha farm such as the Duchy estate they initially applied for would have been a massive jump, requiring an investment of £300,000-£400,000 to get started.

Although he says the appetite for council tenancies is less than for private ones, Mr Trayte praises the competitive application process that Staffordshire employs on its estate.

He believes the council’s emphasis on new entrants forces applicants to have the best business plan possible, and adds: “We wouldn’t have got on if there wasn’t that focus. It’s why Staffordshire is more forward thinking, and it gives us the drive to progress to a bigger farm.

“The council has invested quite heavily in the buildings to meet our needs. It built a new 130x80ft shed to house 100 cow cubicles and a dry cow yard. The council was quite approachable when we went to them with our plans. “

Mr Trayte says ideally he will not be staying the full 10 years, unless land is added to his holding in the future. Instead, he plans to gain experience and build up a track record before taking a good reference from the council and moving on to a bigger tenancy, probably in the private sector.

His goal is to build up a 300-cow herd and allow his twin sons, aged three, to be involved in the future.