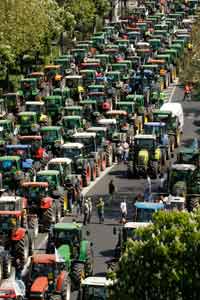 Up to 10,000 farmers descended on Paris in 1300 tractors, according to figures from the French farm union FNSEA.

The protest was timed for the eve of the EU farm commissioner Dacian Ciolos’s visit to the French capital and aimed to heap pressure on beleaguered president Nicolas Sarkozy.

“Demonstrators came to express the distress of a sector and the crisis that agriculture is facing,” FNSEA secretary general Dominique Barrau told Reuters press agency.

The grain growers want interest-free export credits to be introduced and expanded public storage to clear stocks, the FNSEA said.

The farmers were also angry at the EU’s target to cut pesticide use by a half by 2018. The FNSEA said that would leave farmers unable to compete and branded them wrongly as polluters.

French agriculture minister Bruno Le Maire tried to diffuse the situation hinting, during an interview on French radio, that his government could be prepared to do a deal with farmers.

“When there is an unprecedented financial crisis, we can bring a little flexibility in EU criteria. I would like us to be pragmatic when it comes to environmental rules for farmers,” Mr Le Maire told France Inter radio.

The French government has already offered a package of low-interest loans and tax relief and has suggested it may be prepared to curb environmental regulation.

France remains the largest beneficiary of the CAP receiving about a fifth of the total 40 billion euro subsidy pay out.