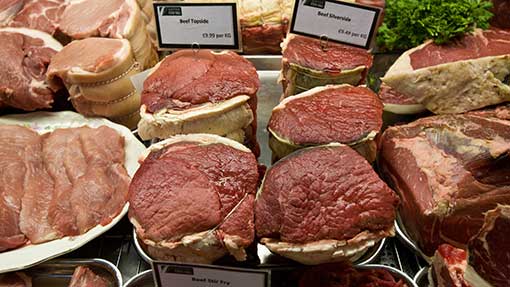 Three of the big four supermarkets have no plans to change their policy on stocking British beef, despite farmer anger.

Tesco, Sainsbury’s and Asda said they would continue to sell Irish beef and were satisfied their labelling and pricing policies met customers’ preferences.

In the past month farm leaders across the UK have called on supermarkets to stop the farmgate price freefall.

The all-steers deadweight price fell another 5.5p/kg this week to 341p/kg due to higher imports from Ireland and slumping consumer demand.

A Tesco spokeswoman said the problem was that the cost price of British beef had nearly doubled during the past four years, making it more expensive for customers and leading some to switch to cheaper proteins. “Clearly this is a challenge for us and our suppliers and we must work together to grow demand, not just production,” she said.

Asda said it used Irish beef to support availability, while Sainsbury’s said it was working with the 600 farmers in its beef development group to double British food sales by 2020.

Its agricultural manager, Andrew Loftus, said the supermarket was taking a hit on its margins to stick with British beef over Irish and to lower on-shelf prices.

“As soon as the spotlight was off [after the horsemeat scandal], our competitors went shopping overseas again, but all through this period we have been 100% British,” he said.

“Failure to secure such commitment by providing sustainable prices for cattle should be a major concern for all those within the supply chain,” he said.