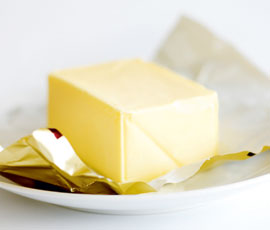 British dairy commodity prices improved in May, despite the seasonal rise in milk production.

April milk output was 4.7% higher than the previous year, with May showing a similar rise, providing plentiful supplies for commodity manufacture. However, most operators are reporting a tight market, with no build up in stocks or anxious sellers, says DairyCo’s latest report. “This has enabled UK commodity prices to edge back up again after dipping during March and early April.”

Bulk butter values increased from £3,250/t in April to £3,450/t in May – almost back up to February levels. “Butter is expected to remain buoyant over the next few months, with further price increases possible,” it says. “Bulk cream prices have increased significantly in recent weeks, with strong export demand helped by the weakness of sterling, and also the early start to the fresh fruit season.” Prices jumped from £1,500/t to £1,700/t over the month.

Despite strong UK skimmed milk powder output, values have firmed slightly to £2,250/t, with mild cheddar up by the same amount to £2,950/t.