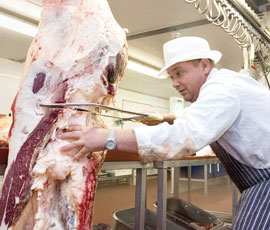 Beef production is likely to decline in 2012, with sheep and pigmeat production set to rise, according to a report by AHDB Meat Services.

“With imports of beef and pigmeat expected to remain tight, and another year of strong export performance, the overall supply of red meat available for domestic consumption is likely to decline,” it said.

Lamb numbers were likely to increase by 1%, but adult sheep slaughterings were set to fall by 4%, resulting in only a marginal rise in overall sheepmeat production. With exports likely to grow, total supplies would increase solely due to greater imports from New Zealand.

Prime beef production was forecast to drop by 4%, with fewer dairy bred males kept and a 10% drop in cull cow throughputs curtailing the availability of manufacturing beef. Imports would decline further in 2012, while exports were set to remain stable, it added.

Increasing sow productivity would drive a 3% rise in clean pig slaughterings this year, although 6% fewer adult pigs were likely to be culled. Pigmeat production would therefore rise by 3%, but increased exports and lower imports would reduce overall supplies.