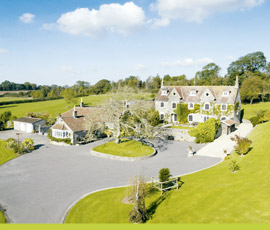 The Meeting House Estate near Wrington, Somerset, is close to both Bath and Bristol and is a mixed estate totalling almost 170ha (418 acres) with several houses, arable, pasture and woodland.

It is for sale as whole or in up to five lots and carries an overall guide price of £5.75m. The main lot includes 363 acres of land and the five-bedroom traditionally-built manor house, which is only 24 years old.

This sits very privately in the North Mendip Hills and has a self-contained one-bedroom annexe, two cottages, arable, pasture and woodland. General purpose farm and storage buildings are included in this lot, with some having been converted to provide income from commercial lettings.

The land is mainly grade 3 with Crwbin soil which is a shallow loam over limestone. This is let to a neighbouring farmer on a Farm Business Tenancy with the arable land in wheat, oats, barley and oilseed rape.

Single farm payment entitlements will be transferred by the FBT tenant to the buyer at a market value to be agreed.

“This is a charming estate; it’s got a bit of everything, including wonderful topography for a great shoot and some commercial enterprise to help finance it,” said Strutt & Parker’s Sarah Macdonald-Smith.

Barley Farm with almost 12 acres of land is the second lot, with a four-bedroom house, garden and paddock. The remaining lots include a plantation, arable land and a detached cottage. (Strutt & Parker 01722 344 010)

About 50 miles to the east, Cliffansty Farm near Clevancy in Wiltshire has mainly grade 2 land and a well-sited grade 2 listed farmhouse. Most of its 118ha (291 acres) are arable and the farm sits on the edge of the Wiltshire Downs, 10 miles from Chippenham.

This sale is as a whole with an overall guide price of £3.125m or in up to four lots. The main house has four bedrooms and a large attic room; a three-bedroom bungalow and a classroom art studio are also included.

Almost 200 acres of the land is grade 2 Blewbury soil type – a freely draining lime rich loamy soil. There is a good range of grain storage, general purpose buildings and a covered yard.

The quality of the farmhouse and the desirability of the farmland was likely to set residential buyers and farmers in competition with each other, said Giles Wordsworth, head of Smiths Gore’s national farms and estates team.

The three-bedroom bungalow was built in 1971 and let on an Assured Shorthold Tenancy. Cliffansty is in a five-year ELS scheme until the end of 2015 and is also in a Nitrate Vulnerable Zone. This sale will include 113.92ha of single farm payment entitlements.