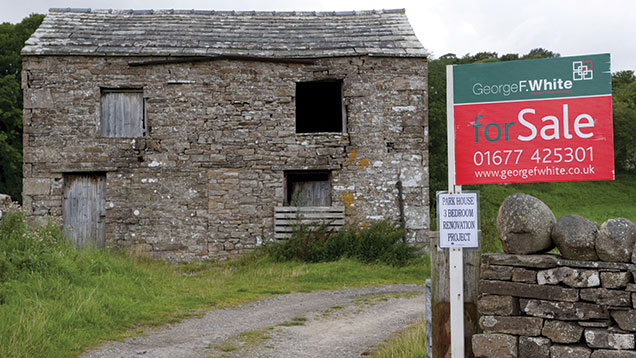 About two-thirds of applications to convert farm buildings into residential dwellings were refused in the first three months after new permitted development rights (PDRs) came into law.

Figures from the Department for Communities and Local Government show that 84 applications needing local authority prior approval were refused between April and June, compared to 45 that were granted. A further 33 developments did not need prior approval.

The new legislation was brought in to increase rural housing by allowing farmers to convert agricultural buildings into dwellings without going through a lengthy planning application process. Yet local authority objections to conversions appeared to ignore the differences between rural and urban living.

See also: How farmers can use permitted development rights

Fenella Collins, head of planning at the CLA, said one of the main local authority objections to conversions was that they were either in “isolated or impractical” places.

The concerns seemed to relate to a lack of access to local services, including public transport.

But this ignored the fact that many rural services no longer existed and most people in the countryside used their own vehicles for transport, said Ms Collins.

It also flew in the face of the legislation, since farms by their very nature were normally located away from settlements.

Conversions were also being refused where development would take the total number of dwellings on a holding to more than three.

Under PDRs, farm buildings can be converted into a maximum of three dwellings, but some local authorities were interpreting it to mean three dwellings across a holding, said Ms Collins.

A lack of evidence as to why a farmworker would need to live near their workplace was also being used to refuse conversions, said Ms Collins. This was despite PDR legislation not requiring residents of conversions to be agricultural workers.

“By bringing empty and redundant buildings back into productive use, councils can unlock the potential of local brownfield sites while protecting their countryside at no cost to the taxpayer.”

But CLA president Henry Robinson said: “If the government is serious about getting more underused agricultural buildings back into use and helping with our chronic housing shortage, then the planning minister must act to ensure local authorities take a genuinely constructive approach to permitted development.

“The introduction of class MB permitted development rights was a hard-fought battle for the CLA and the government. The fact that local authorities are blatantly refusing to follow legislation is a scandal.

Mr Lewis indicated change may be on the horizon.

He added: “We will keep the operation of the permitted development right under review and will consider whether additional planning guidance would be helpful.”