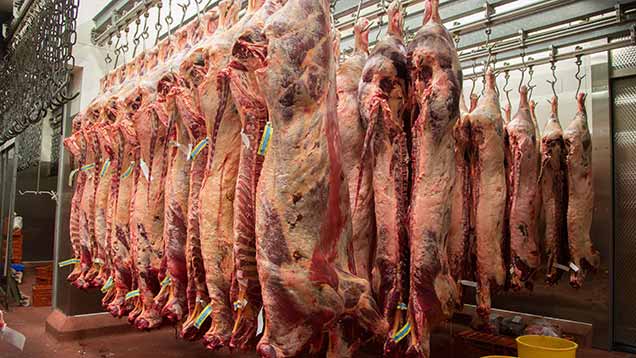 The attractiveness of cheaper foreign beef caused imports to the UK to increase in July.

Beef imports were up 25% in July compared with the same month last year to 23,400t, according to figures from HMRC.

The majority of these shipments came from the EU, with imports from other member states up 35%, lending weight to the evidence that the strength of the pound compared to the euro is having a significant effect, said AHDB Beef and Lamb.

British beef continued to be the most expensive in Europe, said Debbie Butcher, senior analyst at the levy board.

Ms Butcher said that Irish beef production was slowing down (about 70% of UK beef imports come from Ireland), but showed no sign of reducing exports to the UK given the continued strength of the pound to the euro and the fact that Ireland’s exports to the US and China had not taken off as expected.

However, the July figures showed some positive signs for UK producers, with exports of beef and veal down just 4% to 8,200t – a “notable improvement” on the double-digit falls of the previous couple of months, said AHDB Beef and Lamb.

The levy board said: “The strength of sterling against the euro has no doubt affected our competitiveness in the first half of the year.

July exports to France and Italy were particularly good – both up about 20% on the year on the back of increased shipments of higher-priced fresh, chilled boneless cuts.