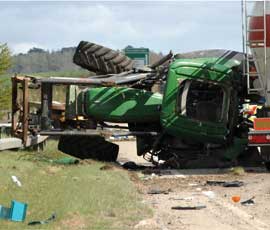 Fewer farmers were killed at work in the UK last year, according to provisional figures released by the Health and Safety Executive (HSE).

Twenty-nine agricultural workers lost their lives in work-related incidents in the year up to March 2013 – a decrease from the 35 deaths recorded in 2011-12.

In the past five years, an average of 36 deaths have been recorded in agriculture in this country.

However, farming still accounts for almost 1 in 5 deaths in the workplace and is still the most dangerous profession to work in. Overall, 148 workers were killed in the UK between April 2012 and March 2013.

HSE chair Judith Hackitt said: “We all have a part to play to ensure people come home safe at the end of the working day, and good leadership, employee engagement and effective risk-management are key to achieving this.”