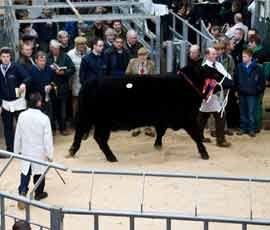 United Auctions has acquired the Stirling Agricultural Centre for an undisclosed sum.

UA Group completed the deal for its company headquarters with administrators KPMG on behalf of the centre’s original owners, Glasgow-based Elphinstone.

The acquisition was part-funded by the Bank of Scotland.

The £15m Stirling Agricultural Centre opened its doors in July 2009 and is the single centre of operations for the UA Group’s Perth and Stirling sales, including the world-famous Perth Bull Sales.

Neil McLean, joint managing director of UA Group, said: “We value the support from the team at Bank of Scotland who have been instrumental in the delivery of this deal. We’re now able to control the development of the livestock centre in the way we intended from the outset and we expect to make further announcements in the near future.”

Sandy Hay, agriculture director at Bank of Scotland, added: “The focus and commitment of the directors at UA Group since their management buyout has resulted in a strong business committed to a future in livestock sales. The purchase of the Stirling Agricultural Centre is a positive move which will enable UA to galvanise the development of the business in the future.”