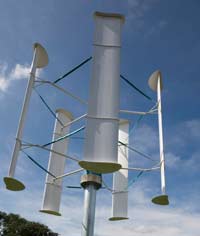 If you are thinking of investing in a wind turbine there are two things you need in large quantities.

One is wind (of course) but the other is dogged determination. Luckily, Monty Andrew has plenty of both.

The anemometer he installed for two years on his farm at Ketton near Stamford showed there was certainly enough wind to run several turbines. And his determination has come from eight years of battling with the planners to install a still-to-be-built 4MW turbine. Not only that, but he’s also in the fly-zone of two RAF bases, which means it is very hard to get permission for anything more than 2m high anyway.

Mr Andrew farms 160ha of mixed arable and beef and was spurred into action by falling commodity prices.

“When wheat dropped to £50/t, I started looking for other income streams,” he explains.

Most horizontal-axis wind turbines (known as HAWTs) have an 18m tower coupled with 7m blades. That means they stand 25m high and planners don’t like them.

So Mr Andrew went for a vertical-axis wind turbine (VAWT) unit, which stands 10.67m high and means planning consent is relatively straightforward. In fact, the whole process took no more that four months, with planning going through in less than 12 weeks.

The turbine he opted for was a 10kW Airvolution unit from Wind-eco, Grimsby.

The company says that in the 12 months it has been selling turbines, none of the 40 planning applications have been turned down.

Of the 300 enquiries it has had, some 85% are from farmers looking to cut energy costs and generate a subsidiary income, he adds.

You do need to establish there’s enough wind right at the start, he advises: “Position an anemometer where you intend to install the turbine for four to six months and download the information.”

By looking at wind probability and wind curves, an average can be calculated.

With an average wind speed of more than 5m/second, the turbine at Holmes Farm should produce more than 12,000 units of electricity a year. Mr Andrew is using about 10,000 units to run his grain drier and milling machine, as well as domestic consumption. The rest is exported to the grid.

The lifetime of the fully commissioned 10kW turbine, costing £36,800, is expected to be over 20 years.

With renewable obligation certificates (ROCS) being replaced with feed in tariffs (FITS), Mr Andrew says he expects to earn about 23p/unit, whether he exports the electricity he produces or uses it himself.

Coupled to how much he saves from not having to pay for the electricity he currently uses – about 10p/unit – he stands to benefit when the FITS scheme comes in by about 33p/unit.

“Assuming future electricity price projections are correct, unit prices could increase by 40% over the next threeyears, so this amount could rise substantially,” adds Mr Parsons.