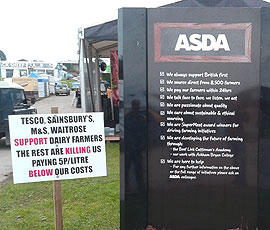 More than 150 dairy producers rallied together to show their upset and anger over Arla’s 4p/litre milk price cut at the Asda stand at the Great Yorkshire Show today.

Calls for the dairy industry to unite together, demands for the price cut to be reversed, along with vows to pour milk down the drain if nothing was done, were listened to by representatives from Asda and Arla.

Among the pleas from the clearly emotive and frustrated group of producers were calls for fair trade for British farmers, the resignation of those who negotiated the prices and a call for retailers to pay the price for discounted milk, rather than those who produce it.

NFU dairy board chairman Mansel Raymond’s calls for an immediate reverse of the price cuts and plea for producers to stick together during this difficult time, were met with applause by all in attendance.

He said:  “All I’m asking is for the retailers to reverse the last 2p/litre price cut immediately to take the heat off the situation.  Otherwise the milk supply in the UK is going to vanish off the face of the earth.”

Responding to pleas from angry producers, Asda’s Chris Brown said he wasn’t prepared to change his position overnight, and said the retailer was in discussions with Arla to come up with a resolution.

Arla’s Ash Amirahmadi told farmers “don’t put a deadline on this” and said the price cuts were a result of oversupply in the global market.  He said the organisation fully supported the Voluntary Code of Practice and said the company may have news on this within the next 24 hours.

“It’s not Asda’s fault or your representative’s fault, it’s the situation that we have in the market in which we operate.  And I firmly believe that the way to resolve this situation is to sit down with our farmers and customers and have a transparent discussion,” he added.

Today’s protest follows on from a NFU briefing where vice president Adam Quinney warned of a mass exodus, like a flood, from the dairy industry unless there was an immediate sea change in pricing and contracts.

“If we don’t see price reversals soon then there won’t be milk being produced next spring by many farmers and the consequence is that in three to four year’s time, consumers will be paying a lot more for their milk.”