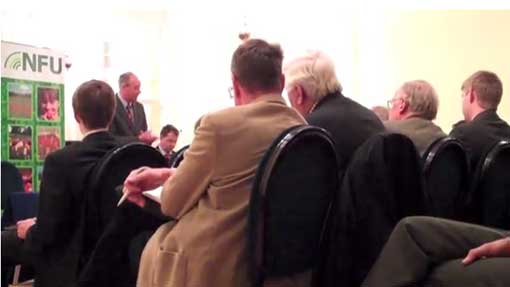 Hustings for the NFU leadership elections are under way, with candidates meeting farmers during an 800-mile trip across England and Wales.

Nine candidates are taking part in the election race, with the first hustings taking place at Petersfield, Hampshire, at 11am on Monday (27 January).

During the next four days, the same candidates will travel to Exeter, Malvern, Llandrindod Wells, Stafford, Skelmersdale, Darlington and Oakham.

The final hustings takes place at Newmarket on Thursday (30 January).

All three top table officeholder positions of NFU president, NFU deputy president and NFU vice-president are up for grabs.

The elections are seen as wide open following a decision by NFU president Peter Kendall to step down after eight years in office.

Also see: All the news from the NFU election

Filmed during the last NFU leadership elections in 2012, our video (below) shows how candidates at each hustings are required to make a short presentation before answering questions from the floor.

They will be elected by the union’s ruling council, which has about 80 members, at the end of the NFU Conference on 26 February.

Ordinary NFU members do not get to vote, but they are encouraged to lobby their council representatives.

A new voting system has been introduced for the first time in 2014.

Votes will be weighted according to the number of NFU members in each county. The union believes the system is fairer and more proportionate.

To find out more about their background and priorities you can also read Farmers Weekly’s guide to the runners and riders .