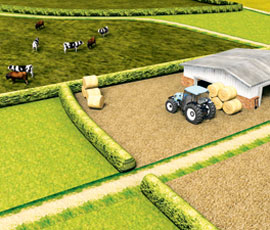 The Farmers Weekly/Savills’ Virtual Farm is facing a sharp drop in its budgeted pre-production profit for harvest 2012.

The original budget was set at Cereals in June 2011 but since then, lower commodity prices, upward pressure on costs and a weaker euro mean it looks as if it will be £113,624 worse off than expected.

Its production profit before rent, finance and single payment from the 2012 harvest was forecast at £136.50/acre but now stands at £80.69/acre.

Despite this, the Virtual Farm’s cashflow is improving and has been for the past couple of years.

“However, it is a top 25% producer and some farms may have to wait a bit longer [before improvements can be seen],” said Robert Hall, associate director of Savills Agribusiness.

The Virtual Farm may consider hedging the single payment against the euro, particularly if it continues to slip back to the levels of five years ago.

Early fertiliser purchase has been the right decision in the past few seasons but Virtual Farm is monitoring volatile fuel costs.

In the long term the farm is looking at options to diversify. With low interest rates, now is a good time for the farm to borrow to increase stable income, perhaps converting traditional farm buildings or investing in renewable energy sources.
• The Virtual Farm is a top 25% arable producer, an efficient, well-run business but facing depreciation and investment issues
• It was created by Savills Agribusiness and Farmers Weekly to identify challenges for similar businesses and design strategies to cope with them
• The farm model is a hypothetical family partnership.