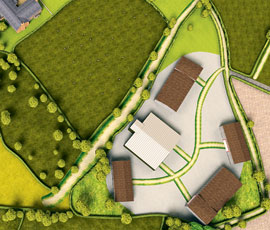 Performance review should be part of any business strategy. Ian Bailey and Alex Lawson of Savills consider the investment performance of the Savills/Farmers Weekly model arable farm since its launch in 2010.


The uplift in value was entirely in the land and buildings. Pressure on residential values and the increase in arable land values over the past few years means the four houses on the farm now represent 11% of the total value.


Demand for good-quality arable farms is strong and we believe the total value of the Virtual Farm is likely to continue to rise, albeit with annual growth more muted at around 6-7% a year in contrast to the 12-15% recorded between 2010 and 2012.


So, by 2017 the Virtual Farm could be worth around £20m. We anticipate residential values will pick up, with growth of 2% in 2014, increasing to around 5% in 2017 and slowing the fall in the value of the residential proportion of the whole (see graph 1). 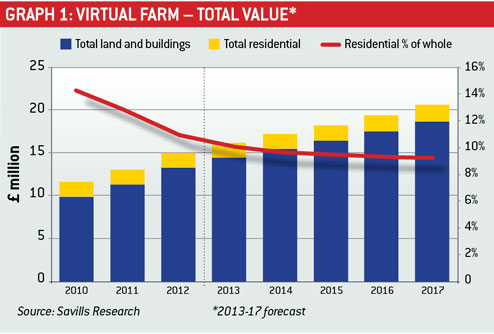 
The core borrowing on a long-term AMC loan had outstanding capital of just £200,000 at September 2012. The long-term loan represents less than 2% of the total property value.

What is the virtual farm?


There is a lot of interest in investing in farmland, especially globally, and although return on capital is not a top objective for many farmers it is sometimes useful to stand back and look at how your business is performing against other assets in this context.


Holding land and farming actively has tax advantages, which contribute to the investment performance of farmland.


We have calculated percentage net income yield for the Virtual Farm by dividing the profit by the average amount of capital employed in the business, including the land value. This, plus any annual capital growth, gives the total return.


As with residential property, the main driver of the investment performance of farms is capital growth. Income yields from the farming business for the 2011 and 2012 harvest years were around 2% on the capital employed, but once capital growth is taken into account total returns come to 13.7% and 16.9% respectively.


The performance of the Virtual Farm is compared against alternative investment assets in graph 2. This shows total return from the farm outperformed the main alternative assets in both years, with the exception of gilts in 2011. 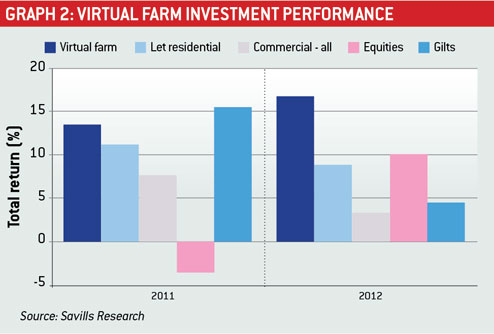 The land market remains diverse, with the strongest growth recorded for the best commercial arable farms. In contrast, smaller farms, predominantly livestock, which have a significant residential weighting, are recording weaker or zero growth in values and therefore opportunities may be more restricted on these farms. However, this shouldn’t preclude them from this type of analysis in a business appraisal.


The above analysis clearly shows the Virtual Farm business is in a strong position. Investment plans will depend on the objectives and succession plans of the family partnership, but they are well placed to consider directions that might include:


Increased borrowing at current competitive rates – this could fund:

Selling and cashing in on the rise in land values over the past 10 years to fund:

Ian Bailey is head of rural research at Savills; Alex Lawson is director of farm agency