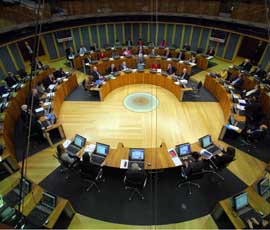 More than 85% of Welsh farmers will receive their single farm payments on Thursday 1 December, the first day that the EU Commission allows payments to be made.

The Welsh Assembly Government’s deputy minister for agriculture, Alun Davies, announced that 88% of farmers’ claims will have been processed for payment on 1 December 2011. More than 90% are expected to receive their payments by the end of December.

The remainder will be paid as soon as claim validation is completed.

Mr Davies made the announcement at the Royal Welsh Winter Fair at Llanelwedd.

“This demonstrates the commitment of the Welsh Government to provide farmers with the best possible service and to ensure farmers get their Common Agricultural Policy direct payments as soon as possible in these difficult economic times,” said Mr Davies.

“These payments show how important CAP is to Welsh agriculture. This is why I am determined to get the best possible deal for Wales in the CAP negotiations that are currently taking place in the UK and in Europe,” he added.

In Scotland, rural affairs secretary Richard Lochhead said 70% of Scottish farmers would receive payments within 15 days of the payment window opening. The Rural Payments Agency in England is aiming to pay at least 86% of farmers and 78% of the SPS pot by the end of December 2011.

Have your say on the RPA on our forums