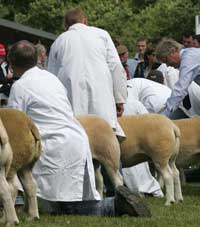 The logo of the Wales Federation of Young Farmers Clubs will soon become familiar to Sainsbury’s customers in Wales.

The company and federation used the opening day of the Royal Welsh Show to launch a new link that will see 80 YFC members supplying lamb to nine stores every week of the year.

The arrangement was initiated at the 2008 event, when federation members asked the supermarket chain to come up with a way of encouraging young people who had an appetite to farm.

“Since then we’ve been working with Wales YFC to build a brand from scratch and launch the range in our Welsh stores,” said Annie Graham, head of agriculture at Sainsbury’s.

Federation chairman Rhys Owen admitted that striking a deal and making it constitutionally possible to use the logo had not been demanding.

“But this is a great opportunity to bring our members closer to the market, and for them to gain experience of working in a group,” said Mr Owen.

As well as receiving a premium for their lamb, a percentage of sales revenue would go towards supporting the work of Wales YFC.

Lambs would be processed through the Dunbia plant at Llanybydder in Carmarthenshire, a major Sainsbury’s supplier that had just invested £1.4m in a new waste management scheme.

It also realised the importance of ensuring livestock supplies by attracting young people into the industry.

Rural affairs minister Elin Jones described the new link as a great boost for young farmers, ensuring that there was a consistent demand and a fair price for their products.