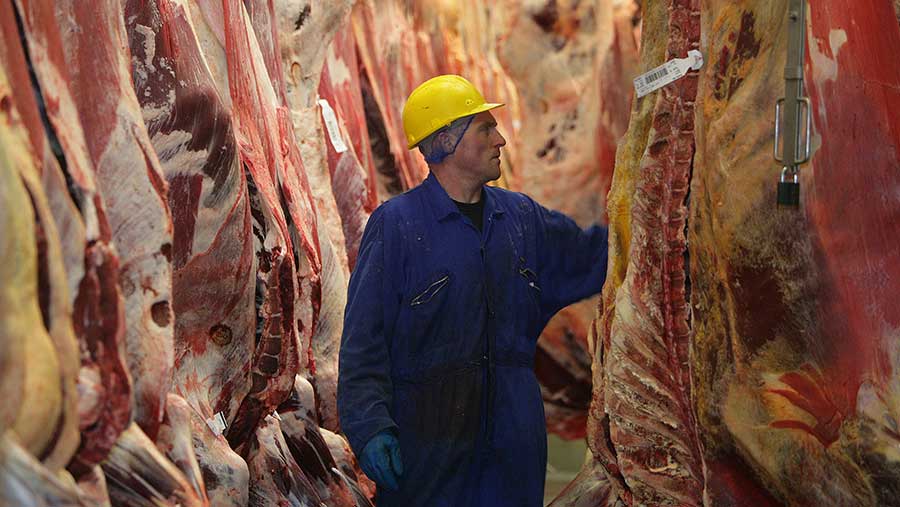 A weakening pound against the euro is helping British beef and sheepmeat exports to the continent.

The value of sterling has fallen in value more than 13% since November, with the pound worth €1.238 at the end of last week compared with €1.429 in mid November, according to the European Central Bank.

This is the lowest it has been since the summer of last year, with analysts blaming the most recent drop in-part on uncertainty about the EU referendum.

Beef exports in particular had benefited from the falling pound, said AHDB Beef and Lamb head of exports, Jean-Pierre Garnier, with improved shipments to Holland, Germany and Italy.

In part this was because many of the beef cuts the UK exported, such as cheek and non-prime cuts were very price sensitive on the continent.

Beef and veal exports in January were at their highest level for many years, said Debbie Butcher, senior analyst at the levy board.

Building trust back up after the BSE crisis had been key to this, she added, as the UK had only been permitted to trade beef again since 2007.

Sheepmeat exports were being less affected by the weak pound, said Mr Garnier, as demand in France, the UK’s main buyer, was fairly static, although some work was needed to maintain volumes.

Farmgate finished lamb prices have followed the seasonal trend and improved since October.

In the week ending 9 April prices were just below last year’s at 427.1p/kg. Mr Garnier said these prices tended to benefit the farmer more than the exporter.

Pork exports had improved significantly recently, added Mr Garnier, due to increased demand from China, although he said it was difficult to quantify and this was due to the demand rather than a weak pound.

“The whole situation [with meat exports] is much livelier at the moment,” he said.

The UK exports about 15% of its beef and 40% of its sheepmeat, according to AHDB Beef and Lamb.