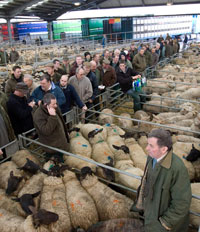 Hogget prices broke through the £100 a head barrier this week as the sheep auction trade continued to benefit from the weak value of sterling and limited supply.

Monday’s (26 January) primestock sale at Borderway Mart, Carlisle, saw prices top out at £100 a head for Texel-cross lambs, while at St Boswells market in Roxburghshire, the top Texels hit £101 a head.

Gavin Hamilton from St Boswells auctioneers John Swan said trade across the board was very strong, and the whole sale averaged £70.23 a head (around 176p/kg), some £20-25 more than the same time last year and £15 a head up on the start of 2009.

“Prices have increased 20p/kg in just one week, which is amazing – last year it wasn’t until the third week in March before we saw markets take a big lift,” he said. While the weak pound against the euro was boosting export demand, he reckoned scarcity of supply was the main driving force.

“The weather last autumn meant a lot of farmers couldn’t get grass keep in and many who would have normally bought stores finished their own. So, numbers are generally down, plus the poor weather meant a lot of lambs didn’t grow as well as they should have, which means average weights are below last year.”

Auctioneers elsewhere also reported very strong trade across all weights. Jonathan Evans from Welshpool said 5600 sheep at Monday’s sale averaged 175.5p/kg, with top price of £91.50 for a 41.5kg hogget (210p/kg). “We’re still getting the numbers through, and I think currency’s the thing that’s really driving it.”

Lanark’s Brian Ross agreed. “We’re seeing a very export-driven market at the moment, mainly for those weighing 36-40kg, which are averaging around 180p/kg.”

But, there were also more sheep coming forward, as farmers looked to cash-in on the high prices, he said. “We’re definitely getting sheep come through that we wouldn’t normally have seen for another three to four weeks. The weather’s also having an effect, as grass is starting to disappear.”

He, like other auctioneers and farmers, hoped the buoyancy would continue into the spring lamb trade.

“The spring lamb trade has always been a bit sticky, so hopefully it might be the shot in the arm it needs,” Bernie Hutchinson from Market Drayton said. “There isn’t the volume of lambs in Europe due to bluetongue, the pound’s so cheap it’s helping our exports and the UK market is not oversupplied. I am optimistic, but you never know exactly what will happen.”

Since sinking to a low of £1 to €1.02180 at the beginning of January, sterling has made an, albeit slight, recovery in recent days – helped by improved confidence in some of the major UK banks. Shares in Barclays, Lloyds TSB and Royal Bank of Scotland all rose by more than 10% on Tuesday morning when £1 was worth €1.07835.