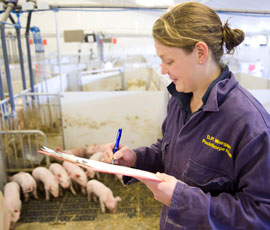 However, some sellers felt the rise should have been greater, reflecting significant improvements in contract and spot prices the previous week.

Tulip however set the tone for the industry by holding prices and all other shout price operators followed suit, but large numbers of pigs were sold for next week with very few reports of pigs being rolled.

The league table for this week reads:

As a result, spot bacon was generally traded in the 147-150p/kg range according to specification, but the smaller fresh meat buyers were still reporting quiet times on the high street, so once again demand was focused at the heavier bacon weight end of the trade.

Plenty of competition in the sow sector and dwindling numbers saw prices at generally positive levels and an odd extra penny available in places where buyers were short of numbers. But there was still a fairly wide variation in prices from 116p/kg to 120p/kg for large loads, but on a tighter specification.

Weaner prices remained under pressure due to a lack of finishing space and the Agricultural and Horticulture Development Board 30kg ex-farm weaner average remained static at £41.28 a head. That was despite generally easier feed prices, with ex-farm wheat traded at £144/t and futures prices for early 2012 also showing an easier trend.