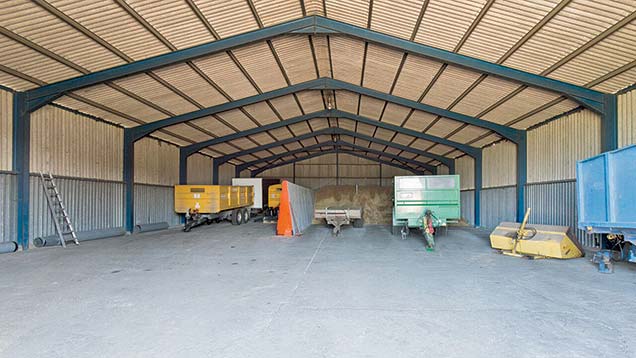 A number of large, well-equipped arable farms are for sale this week, totalling about 2,000 acres.

This includes the opportunity to buy a fully equipped, 821-acre Bedfordshire farm with Grade 2 land at a guide price of £9.25m.

Near Biggleswade, West Sunderland Farm (pictured right) is ring-fenced and is put to wheat and oilseed rape. It has previously produced field vegetables and has spray irrigation supplied by a 20,000cu m reservoir.

A dutch barn hosts a grain cleaner and elevators, and there is a total 2,200t of on-floor storage across a range of buildings, with a further 100t drying bin. There is also a four-bedroom house.

The farm withdrew from Entry Level Stewardship, but many of the measures remain in place. It also has long-term strategic investment potential, being in close proximity to rapidly developing Biggleswade. (Robinson & Hall 01234 351 000)

With about 527 acres of Grade 2 arable land, Redhouse Farm, near Waddingworth in Lincolnshire, is for sale at a guide price of £5.25m.

The Grade 3 land is divided into four principal ring-fenced parcels, put to an arable rotation with good track- and perimeter-road access.

The farm’s four-bedroom house is subject to an agricultural occupancy condition, but planning permission has been submitted for a building to be converted. Permission has already been granted for a 16,000-bird free-range egg unit.

Over in the Forth Valley, West Lothian, two farms are being sold totalling 673 acres.

Both are predominantly arable operations, each with their own farmstead and house just two miles apart, near Bo’ness.

The focus of the rotation across the farms has been seed barley, which is dressed and bagged on farm, but wheat and oilseed rape are also grown, along with some grass leys. Store cattle are grazed before being finished inside, while winter grazing is let for sheep.

Land is split into large fields with good access and more than 1,000t of grain can be stored and dried across the two sites, while there is an extensive range of buildings. (Savills 0131 247 3723)

About 40 acres of the only Grade 1 soils in Warwickshire is included in the sale of 130 acres at Maxstock, near Coleshill. The land is predominantly Grade 2 and put mainly to combinable crops. It is for sale at a guide price of £1.5m as a whole, or in three lots. (Howkins & Harrison 01827 721 380)

College Farm, near Silsoe in Bedfordshire, is a ring-fenced block of Grade 2 and Grade 3 arable land. The 264 acres adjoin a residential development so may have strategic investment appeal at a guide price of £2.6m. (Savills 01223 347 231)

Four blocks of Grade 2 arable make up the land at Sutton St James near Wisbech in Lincolnshire. The 189 acres have previously been cropped to sugar beet and wheat and are for sale at a guide price of £1.84m. (Savills 01223 347 231)