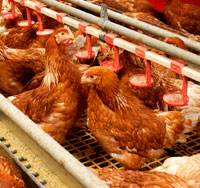 Although the free-range market is currently over-supplied and prices are falling, Beddoes and Sons is confident that the long-term outlook is good.

The family has run a deep-litter barn system at Common Piece Farm, Church Stoke, Powys for 45 years, and has been producing hatching eggs under contract for Lohmann GB for the past 20 years.

The system was achieving good results, but the family knew they had to either replace the 40-year-old wooden poultry unit or give up production.

“We had reached a crossroads, the building was outdated and it wouldn’t have suited the demands of buyers,” says Michael Beddoes, who established the business in the 1960s.

They opted to invest and erected a 24,120sq ft clear-span steel building with controlled ventilation. So far they have doubled hen numbers to 20,000, and by September will have completed a second unit and expanded further, to 39,000 laying hens.

The new unit incorporates a two-tier Jansen auto nest with 10 lines of feeders and four lines of drinkers. Of the 17,000 hatching eggs produced daily, only 20 on average are laid on the floor or slats.

“The system works really well, the eggs are exceptionally clean,” says Mr Beddoes. “If the ventilation is right the muck turns to dust.”

Although most of the land at Common Piece Farm falls in Wales, the family missed out on a grant available to Welsh egg producers because they have a Shropshire holding number. They would have been eligible for up to 40% grant aid for fittings in the new unit had their holding number been across the border.

“It does put us at a bit of a disadvantage, but we haven’t dwelt on it. Once we knew we weren’t eligible we just got on with the job,” says Mr Beddoes.

Around 90% of the eggs are laid by 11am and are collected as soon as possible after laying to minimise the time they are exposed to any bacteria.

They are then placed in a cool room to help preserve their internal quality. Fertile eggs can be stored for up to seven days at about 12-15C without loss of hatchability.

The eggs pass through a grader and, because of the danger of bacteria on egg shells being transferred to the hatchery, all fertile eggs are fumigated on the farm to kill surface bacteria without damaging the fertilised ovum inside the egg.

The eggs are stored in a temperature-controlled environment and collected by Lohmann GB twice a week. “No egg is on the farm for longer than four days,” explains Mr Beddoes. The eggs are delivered to the Highline hatchery near Bromsgrove.

To maximise egg fertility, there are seven cockerels to every 100 hens – Lohmann Lights supplied by Lohmann GB. After 12 months the poultry are sold to the processing industry. The entire flock will be disposed of on 6 August with restocking on 10 September.

The hens suit the Beddoes’ system because their eggs aren’t too big. At under 65g they sit well in the automatic packer. Before automation, Michael and his wife, Vera, spent seven hours a day packing 8000 eggs. The machine in their new unit, operated by their son, Jonathan, packs 28,000 eggs an hour. Jonathan manages the poultry unit while his brother, Ben, oversees the dairy herd and ice-cream business.

The poultry business sits well alongside the other enterprises. “We’ve got four families living out of the business so we feel it’s important to have a range of activities,” says Ben Beddoes. “The dairy industry hasn’t been fantastic which is why we have decided to invest more heavily in the poultry enterprise. We had to have state-of-the-art facilities, it’s the way forward now.”

Biosecurity and hygiene in the poultry unit are paramount. Visitors are kept to an absolute minimum, but anyone who is given access must wear a gown and special footwear. If they have been in contact with poultry in the previous 24 hours they must shower.

“We can’t risk any infection getting into the unit, it would decimate our business so we prioritise biosecurity,” says Michael Beddoes.