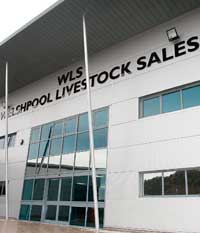 Wales’ livestock trade has been given a boost after one of the largest livestock markets in Europe opened in Powys.

It is hoped the market, which is one of the largest developments in mid-Wales for years, will create hundreds of jobs, support the area’s rural community and boost livestock trade.

Lembit Opik, MP for Montgomeryshire, said the market would be a crucial link in creating a sustainable production chain for agriculture.

“The development is at the heart of regeneration in the area and will create thousands of jobs in the food supply chain and wider rural economy,” he added.

Work on the market, which has more than 1000 sheep pens and 200 cattle pens as well as additional penning available for annual one-day sale volumes, began in November 2008 and was completed last week.

The existing market in Welshpool’s town centre is set to be redeveloped into a retail area, including a supermarket and petrol station.

Gareth Vaughan, Farmers’ Union of Wales president, said he believed the new market would continue to attract livestock from across the region.

“And I’m confident that the market will remain a magnet for a large number of buyers for the excellent produce of farms throughout mid and west Wales,” he added.