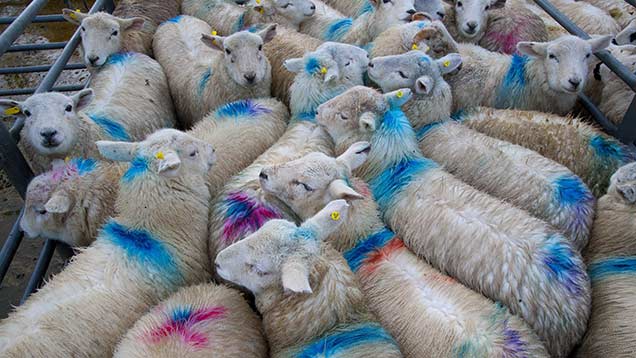 A protest plan to stop selling lambs for a week has hit some Welsh markets hard.

Some auction marts reported much lower numbers at Monday sales due to the #NoLambWeek campaign, launched in reaction to plunging farmgate returns.

The picture was less dramatic in England, with numbers down just 7%.

At Llanybydder in Camarthenshire the entry of new-season lambs halved to 250.

Auctioneer Dewi Davies says the usual total would be closer to 800.

“The effect was there, but nowhere near 100%,” he said. “And the local abattoir was taking hundreds of lambs like they normally do.”

Cardigan market in Ceredigion also saw a major drop-off, with auctioneers blaming the protest. New-season throughputs fell 74% on the week to 112.

AHDB reported 26,000 lambs were sold across Britain on Monday. Prices improved, with about 14% fewer on the market.

The British new-season SQQ rose 10p/kg compared with the previous Monday, taking it to 155.7p/kg.

AHDB senior analyst Mark Kozlowski said throughputs were definitely down, but it was difficult to tell this early on.

“It is hard to pin down what actual effect there is [from the protest],” he said. “It looks as if numbers have fallen, but there are other factors playing into it.

“It might be more telling at the end of the week.”

The #NoLambWeek initiative is running from 1-7 August.

Farmers have been encouraged to hold back lambs to put the pressure on retailers.

Producers want retailers to pass the lower prices on to consumers to help boost demand for lamb, and make country-of-origin labels more clear.