The Royal Show is set to close early for the first time in its history after torrential rains left the showground saturated.

In a move described as “heartbreaking”, the Royal Agricultural Society of England announced that the show at Stoneleigh Park, Warwickshire, would close on Tuesday evening (3 July), a day ahead of schedule.

Peter Stovold, Royal Show director, said the heavy rains had forced show organisers and the police to take the decision to ensure the safety and welfare of the public, traders and exhibitors. 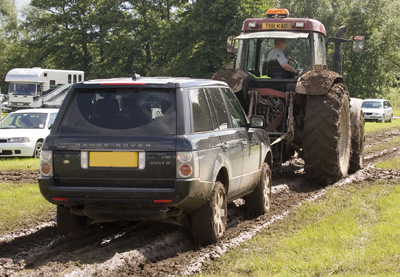 Cars were towed out of car parks at the Royal Show

“The weather conditions have been quite exceptional. There has been so much rain and it has had nowhere to go.

“It was a decision purely based on health and safety and we hope people will understand. However, it’s business as usual today.”

Two of the showground’s car parks were closed on Monday evening after drivers had to be towed from the soggy fields by tractors.

A further 30 acres of barley and hay fields were mowed to provide additional parking on Tuesday.

But with another half inch of rain forecast throughout the day, Mr Stovold said there was likely to be a “real parking problem”.

John Moverley, RASE chairman, said the financial implications of the wet weather and closing the show early were being assessed.

“We haven’t got exact figures, but it looks as though we are down by about 10% for the first two days on last year,” he said.

“It’s fair to say it will take a long time to put the showground back to the way it was.”

Mr Moverley said it was far too early to say what would happen to next year’s show, but at the moment it was still set to go ahead.

For more on the show visit our Royal Show 2007 report
Sympathy for the organisers? Visit our blog posts on Food for Thought and for the latest from the stock lines read Taking Stock