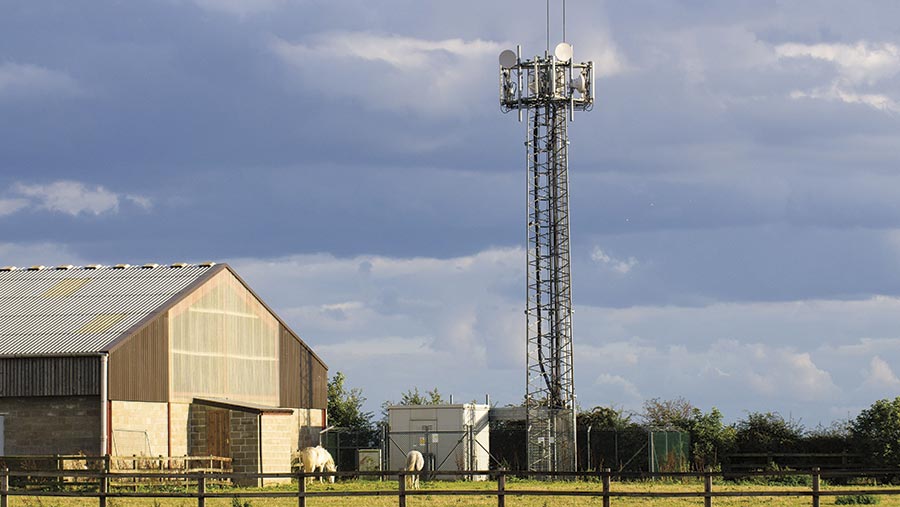 A new code covering mobile phone and broadband infrastructure is to come into force later this year – affecting all landowners with telecoms equipment on their land.

So what are they key changes farmers need to know?

Jeremy Moody, secretary and adviser to the Central Association of Agricultural Valuers explains some of the important points.

What’s in the code?

The new Electronic Communications Code aims to facilitate the roll-out of high-speed broadband and 4G mobile connectivity – a long-awaited move for those in rural areas.

Covering phone wires, masts, poles and other infrastructure, the code will affect all new agreements as well as the renegotiation of existing contracts.

It is likely to come into effect by the end of this year – supported by a code of practice covering behaviour and negotiation.

The changes have led to speculation rents might plummet. However, this is not the case, and it’s important for farmers to understand exactly what the main changes are and how this will affect their rights and obligations.

The code applies when an agreement is made for telecommunications purposes. These agreements must:

The code will set a statutory framework with legal rights for both landowners and operators, but within this framework, the parties are free to negotiate their own terms – making contracts more workable for all parties.

The changes will also introduce timescales for negotiations of lease renewals, making the renewal process much more structured.

Landowners can seek termination of an agreement by giving 18 months’ notice. However, to protect the network, the grounds for termination are limited to:

Should a notice of termination be issued, the operator has three months to serve a counter notice and if an agreement is not reached they must refer the matter to the court within three months of the counter-notice.

Courts have the power to order agreements to go ahead, but they must also set fair and reasonable terms, including a market-based rent.

Rents for new agreements will be based on market value, but certain assumptions have to be made, including:

Landowners will no longer be able to prevent the lease being assigned to another operator. And they won’t be able to control or seek payment for upgrading or sharing apparatus unless the change would burden them (perhaps with increased access) or have an adverse visual impact.

Neither the change to contract negotiations or sharing of sites seems likely to materially affect rents. And the government is clear that landowners should be paid appropriately for allowing operators to use their land, on the basis of negotiation rather than just compensation for loss.

However, to ensure landowners are getting what they are entitled to, it is vital they employ an experienced professional valuer to help set a fair rent.

With greater awareness of the law in this area, owners and operators will each think more carefully about they want in the agreement.

Operators will want access to keep apparatus updated as well as minimal administrative costs in managing their sites.

Owners might typically consider what protection they need on access, upgrading, sharing, and the protection of development – perhaps by writing flexible provisions for relocating infrastructure.

High-speed broadband and decent phone connectivity are of benefit to all – particularly those in rural areas where this has been an issue for many years. This new code will give a balance between public interest and owners’ private rights.

However, how it will work in practice will depend on how parties behave, which is why it’s vital landowners are well-informed and professionally advised from the outset.