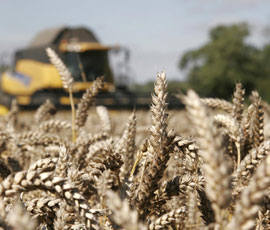 Wheat prices have continued their upwards march, rising by a further £3-£4/t on Friday (13 July).

The bullish run was sparked by the US Department of Agriculture’s latest report, which slashed estimated corn yields following recent dry weather. It rated just 40% of the corn crop in good to excellent condition, a drop of 8 percentage points on last week and 37 points below its initial rating.

“EU markets continue to be driven by a tight old crop wheat scenario, the prospects of delayed harvest and rising quality issues across much of Northern Europe,” said Jonathan Lane, trading manager at Gleadell Agriculture.

Strategie Grains recently cut its EU soft wheat production estimate by 600,000t, with downward revisions for Spain and the UK putting the total crop at 123.6m tonnes. “In addition, lower harvest/export projections from the Black Sea continue to support the market.”

Oilseed rape values had also been buoyed by the USDA report, with Paris rapeseed futures rising by another €5-6/t today, to €518/t (£408) for August and €505/t (£398) for May. “Unfortunately for the UK farmer, Sterling has continued its rise against the Euro, which has eroded UK ex-farm prices slightly, with old crop trading around £390/t ex-farm and new crop at £380/t, depending on location,” said Willie Wright, Gleadell’s oilseed trader.

“Weather in Europe and the UK hasn’t favoured crop production or ripening – the French estimate their rapeseed harvest to be around 10 days behind last year,” he added. “The UK harvest looks set to be 10 days to two weeks behind last year, which may help the few hardy souls achieve the magical £400 level for their old crop.”