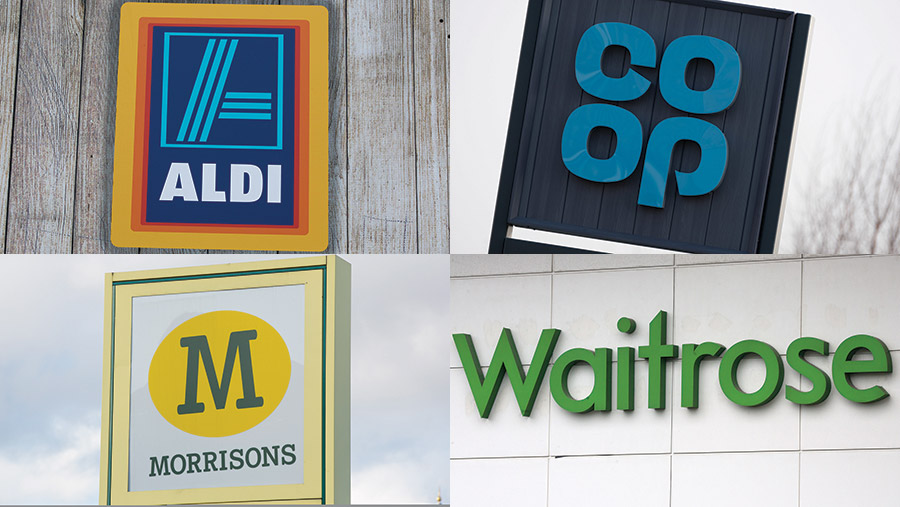 As the Brexit process rumbles on, promises of cheaper food continue to be ramped up.

MPs Jacob Rees-Mogg, Liam Fox and Owen Paterson have all touted lower food prices as a post-Brexit benefit, despite the UK already having the third lowest consumer spend on weekly shopping in the western world.

So, Farmers Weekly asked the top eight grocers whether they would maintain their current commitment to fresh British beef, lamb, pork, chicken, cheese and eggs in the event that a no-deal Brexit opens the door to cheap imported food.

Here is how they responded:

Despite Tesco UK beef manager recently telling the Irish Independent that stocking South American beef post Brexit was “out of the question,” Tesco did not extend this commitment to other commodities in response to Farmers Weekly’s questions.

A spokesperson said: “Tesco has no response at this time.

“Brexit is a big issue that we are taking very seriously and we will update when something changes.”

Farmers Weekly says: It is a shame after being the catalyst for this story with a firm commitment to safeguarding British beef producers from South American competition, the UK’s largest retailer did not extend this guarantee to other commodities or sources.

“We are very proud of our support for British farmers and we will continue to work with our supplier partners and farmers to champion this commitment.

“In addition, we support the Red Tractor assurance scheme, which acts as the flagship for quality British food, and have no current plans to alter either of these commitments.”

Farmers Weekly says: The Co-op has invested heavily in backing British farmers so it’s great to see it wholeheartedly commit to continue this strong relationship.

“Back in 2007, we announced our commitment to buy 100% fresh British beef, pork, lamb and chicken to sell in our stores.

“Through our manufacturing sites, we work directly with 3,000 British farmers we know and trust.

“Eighty per cent of the 140 pig farmers and 1,700 cattle suppliers only grow their product for Morrisons.

“We have no plans to change our commitment to British farming.”

Farmers Weekly says: Morrisons has a laudable record in backing domestic producers. Its further commitment should be applauded.

“Our support for British farmers will continue.”

Farmers Weekly says: Aldi has a great track record for stocking British produce and regularly appears at the top of the Groceries Code Adjudicator’s retailer-supplier relations survey. It is positive to see the retailer extend its commitment into a period of great uncertainty.

“We remain committed to offering our customers the best possible choice, quality and value while continuing to uphold our high welfare standards

“We currently offer beef only from the UK and Republic of Ireland (labelled British, Scotch, Welsh, Irish or Northern Irish).

“There are no plans to change this.”

Farmers Weekly says: The UK’s second largest food retailer is to be commended for its commitment to UK beef. However, the ambiguity of its opening line is a concern, leaving the door open for other commodities if they match UK welfare standards.

“We will not be changing our sourcing policies.

“Cheese is a mixture of UK and authentic continental.

Farmers Weekly says: Unambiguous and to the point. Hats off to Waitrose for an emphatic commitment to its UK suppliers.

“We are proud to show our support and champion British farmers and producers through our backing of the NFU’s Fruit and Veg Pledge and Back British Farming Charter.”

Farmers Weekly says: Lidl has a great track record on promoting and stocking British fresh meat and eggs, so it’s disappointing not to receive a firmer forward commitment on this.

Asda failed to answer Farmers Weekly’s questions despite being given ample time to do so.