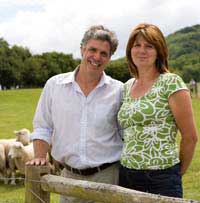 One of the finalists of this year’s

Farmers Weekly Sheep Farmer of the Year Award,Chris and Caroline Hodgkins of Washington, Worthing have been crowned the Hampshire Down Commercial Flock of the Year 2009.

They were commended for producing high performance lambs from an extensive, easy care grassland system, by judge, Hugh Veitch, sheep farmer and livestock buyer for Scotbeef.

Each of the finalists’ flocks were managed to the highest standard, but Chris and Caroline Hodgkins’ 3000-ewe flock had the edge, he says.

“They are demonstrating how high EBV Hamphire Down rams produce crossbred lambs with minimal intervention at lambing.

“Within three months these lambs are reaching 18kg target weight from rough herbage and are grading R or better.”

“Their stockmanship is first class.”

In joint reserve were David and Sally Dixon, Hartley and Will Vose of Ormskirk. The fourth winning finalist was Andrew Snow, Stroud.

The Dixons also walked away with the Caltech award for the flock demonstrating best nutrition.

The four finalist shared £1000 worth of Crytalyx products from Caltech and also received ram purchase vouchers from the Hampshire Down Sheep Breeders’ Association.

We are delighted by the enthusiastic response to our first ever industry award, says Jennifer Atkinson,

“The initiative achieved one of its major objectives – to strengthen links between pedigree breeders and commercial farmers.

“And it has rewarded commercial producers who are taking advantage of the modern Hampshire Down’s recent genetic improvements.”