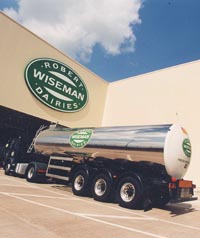 Robert Wiseman Dairies has announced that it is to cut its farmgate milk price by 2.2p/litre from next month.

It is the biggest cut to be announced this year and will take the price it offers farmers to 25.02p/litre from 1 February, until further notice.

RWD blamed the decision on a “severe and prolonged downturn” in bulk cream commodity prices it produces around 85m litres of cream every year, with around three-quarters of it sold in bulk form.

“Although we were able to maintain our milk price in January, with the continued decline in bulk cream income we now need to realign the price we pay for raw milk to more closely match the value of the product,” Pete Nicholson, Robert Wiseman Dairies milk procurement director said.

“This is the first reduction by Robert Wiseman Dairies since August 2006, and we remain committed to offering one of the best non-aligned milk prices available in the UK.”

But, Colin Telfer from Wiseman Milk Partnership, which represents RWD suppliers, was “bitterly disappointed” by the cut and said it sent the wrong signals to producers and undermined confidence in the industry.

“With bulk cream to sell to weak commodity markets, it is clear that Wiseman is not immune. I hope now that we see some stability in the milk price going forward, which will allow farmers to plan ahead.”

NFU Scotland president Jim McLaren agreed and said that such a large price cut at a time when GB milk production was at a 40-year low was “astonishing” and he was unconvinced that weakened cream markets alone could be held responsible.

“The three milk processors responsible for supplying all GB’s major supermarkets – Wisemans, Arla and Dairy Crest – have all now cut their milk prices to farmers in the past few weeks.

“The major supermarkets have all gone some way in recent years to secure their supplies of fresh milk by entering into arrangements with groups of farmers. It is time for those supermarkets to stand by their commitments and ensure that those farmers supplying them with liquid milk are receiving a truly sustainable price.”

He called for an end to the “tit-for-tat price cuts amongst processors” and hoped the Wiseman’s announcement would be the last of the latest round of price cuts, with the next price moves being upwards.

* Want to know what we think of this price cut? Check out Phil Clarke’s Business Blog and leave your own comment