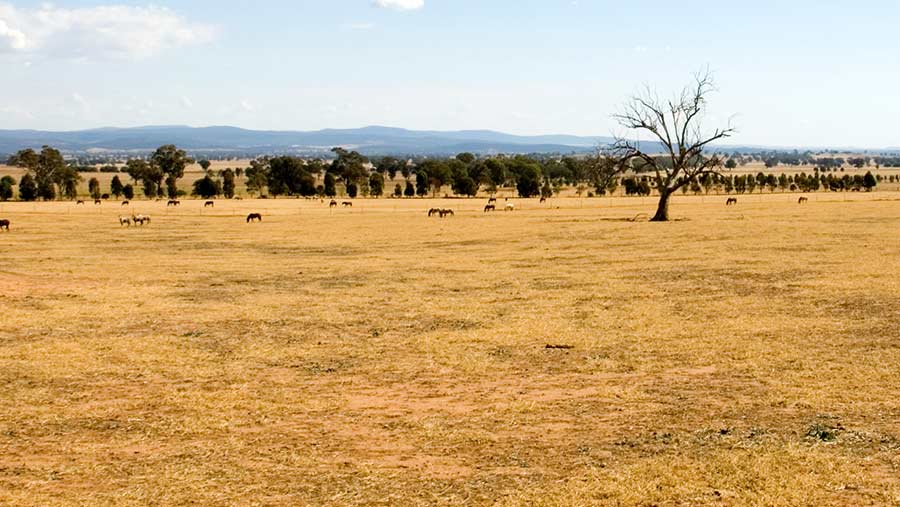 Australian farmers wrangling with the country’s worst drought in living memory have been forced to take extreme measures to keep animals fed and stop crops dying in fields.

The number of animals sent to slaughter is expected to hit 7.8 million by December, according to industry body Meat and Livestock Australia, an increase of 9% compared with 2017.

Hay has been transported more than 3,500km (2,175 miles) to victims of the “Big Dry” to help livestock producers in New South Wales (NSW). Many producers have already had to completely destock as the whole region has been declared in drought.

Hundreds of thirsty cows swarm a water truck after their owner drove more than an hour to get water just to keep them alive. It comes as 100% of NSW is declared drought-affected and there is no end in sight to the worst big dry in Australia for decades. pic.twitter.com/z8qowNXA4g

Some farmers say they haven’t seen a drop of rain since December 2017, as stocks of hay in the worst-hit areas all but dry up.

Feed costs were at near-record levels in the worst affected areas of NSW and Queensland.

The drought could also cut Australia’s wheat harvest by 20% to between 19m and 22m tonnes.

In response to the cost of stock feed and transport spiralling, the Australian government has increased funding to $1.8bn (£1.03bn) in federal aid to support those worst hit.

Farmers will have access to low-interest loans, repayable over the course of four years.

Some regions of the country have been in a state of drought for between one and seven years.

One dairy farmer, Shane Hickey from the Northern Rivers region of NSW calculated he was paid just $2.46/hour (£1.41/hour) his work producing milk in July, comparing his wage to slavery and prompting an emotional video appeal on Facebook.

Mr Hickey said his production was already down by 50% compared with last year and milk supplies were disappearing quickly.

Thank Woolworths and #Coles Supermarkets I just worked for $2.46 per hour to provide you with milk

Special measures have been introduced to allow farmers to shoot kangaroos, as wild animals have been moving closer to human settlements in search of food and grazing.

Farmers and members of the public from less badly affected areas have donated millions of dollars in hay and diesel to shift vital supplies across the country to those who need them most.

Tasmanian businessman Glenn Phillips, who put together a group to gather and deliver aid supplies including hay, told ABC Australia the support he had seen come forward was incredible.

“We thought we ought to run some hay up there in New South Wales and one thing led to another,” said Mr Phillips.

“Now, a week later, and here we are 14 trucks, 18 blokes. We’re heading there on Monday morning to Melbourne to help the poor buggers in New South Wales.”

Although global exports of Australian chilled and frozen beef actually increased by 13% in July to 105,158, exports to the EU plummeted by a third on the month and 38% year-on-year to 973t.