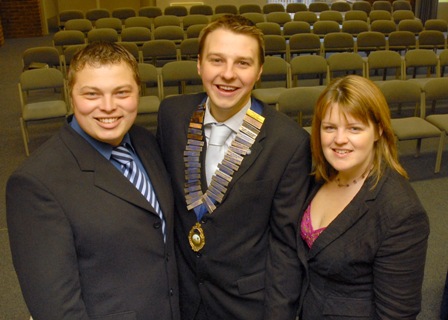 The National Federation of Young Farmers’ Clubs has elected it youngest ever chairman – 26 year old Bryce Mackellar from Staffordshire.

Bryce is a farmer’s son from Home Farm, Stowe by Chartley, Staffordshire and was elected at the October Council Meeting.

He farms in partnership with his parents, helping to manage 900 acres of tenanted land, which is predominantly arable and sheep.  Bryce studied agriculture at Brackenhurst College, Nottingham.

Helen Roberts from Montgomeryshire and James Chapman from Warwickshire were elected as vice chairmen of the NFYFC.

Bryce Mackellar said:  “I am very pleased that the overall national membership of Young Farmers’ Clubs (YFCs) has grown over the last year by just over 400.

“This is great news and my aim as chairman is to see a continuation of this trend.  I would like to see the membership concentrate on the basic YFC skills; achieving good business meetings, training, skills-development, taking part in competitions and of course having fun, which will continue to strengthen the organisation at its grass roots.”

YFC members are welcome to contact Bryce by email.

NFYFC president Lionel Hill commented:  “I am so pleased we now have a national chairman who is of membership age.  Bryce has always had the ability to communicate both with young and old members alike.  This election ensures that YFCs will move forward with the times.”