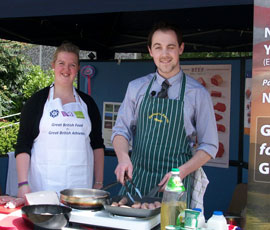 Young Farmers have kicked off their series of cook-a-thons along the Olympic torch relay route.

This joint initiative between the National Federation of YFCs and Natural England is showcasing the importance of using local, sustainable food and promoting the role that British farmers are playing in supplying London 2012 with produce.

The first of 10 events across England took place at Taunton on 21 May to be followed by one in Stoke-on-Trent on 30 May.

“We have taken this opportunity to celebrate local food, farming and the countryside surrounding Taunton,” said Lloyd Tucker from Polden Hills YFC in Somerset. “We are proud that we are supporting our great British athletes by sourcing and cooking great British food.”

Mark Felton of Natural England adds: “The Olympic torch relay cooking demonstrations are a truly marathon undertaking and one of the most ambitious events ever held by YFC members.

“It has been a golden opportunity for Young Farmers to enthuse and inspire local communities and young people about the role that they play in producing food and in the conservation and enhancement of our natural environment.”