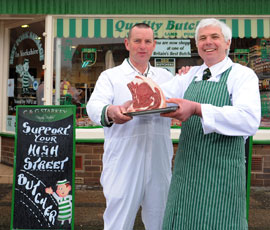 A Yorkshire farmer and butcher launched a nationwide campaign this week, to save Britain’s remaining high street butchers.

“The Meat Crusade” is the brainchild of eighth generation farmer and wholesaler butcher John Penny, who is passionate about putting quality butcher’s meat onto more British tables.

“We were once a nation of shopkeepers with generations of butchers, bakers and greengrocers who knew every customer by name,” said Mr Penny, owner of Yorkshire’s John Penny & Sons.

“The way we shop for meat has been radically altered by the domination of faceless but convenient one-stop shops that encourage the use of mass food production techniques to create high volumes of produce.”

“Hand on heart, I can vouch that meat bought from a respected butcher will be tastier, and in many cases better value than the equivalent mass produced offering,” he said.

“The high street butcher has a great deal of competition in the 21st century, and our campaign aims to level that playing field. There is much public affection for butchers, but we need to get behind them so that they can compete in today’s fast paced retail environment. Raising awareness and encouraging shoppers to vote with their feet is key to our Meat Crusade.”

The campaign will target high profile chefs and food writers for their support, as well as offering advice on how local butchers can compete with the larger retail outlets – from offering a wider range of goods, to introducing delivery services or out-of-hours pickup services at the local pub.

“Butchers have to change with the times and keep pace with the market,” said Mr Penny.

“If we don’t shop at the local butchers they will go, and once it’s gone you can’t recover that loss. It’s time to halt that decline and celebrate what butchers do best – sell quality meat.”