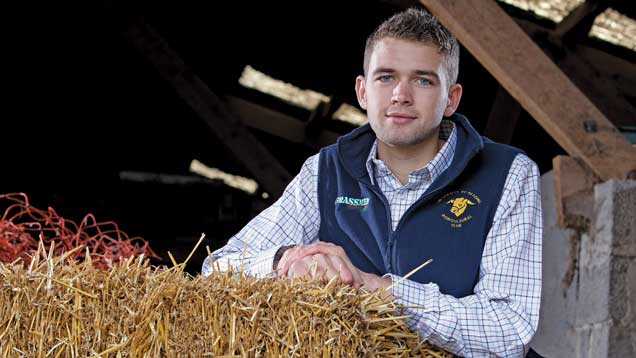 After seven months, more than 250 applicants and one very intensive, week-long bootcamp the search to find Britain’s brightest, young farming talent in the Farmers Apprentice competition is over.

How did it feel to win?

It felt amazing.  I was so happy, emotional and absolutely shattered as I think I had been up for 34 hours putting my business pitch together. When we got told, I just put my head in my hands and cried. I thought I had left it too late to show my true colours and that I was too quiet. It was such a shock.

What was the first thing you did when you won?

I couldn’t wait to get home and tell my parents. I marched my parents into the front room and told them I had a photo I wanted to show them. I made them face the wall and when they turned around I showed them the giant £10,000 cheque. They just burst into tears.

What are you going to spend the prize money on?

I am planning on doing a few quick investments to increase the money pot. I hope to make £2,000-£3,000 from buying some store lambs and finishing on stubble turnips I’ve already bought from my neighbour.

Farming background Had a passion for farming from a young age, but immediate family not in farming. Slowly built up a business after going into partnership with his dad and securing a tenancy with the MOD.

Bootcamp low Leaving all the other finalists

The main thing I’m going to spend my money on is setting up a sheep milking business. Bootcamp gave me the headspace to come up with the idea of milking sheep. So my plan is to import some Friesland ewe lambs and buy the equipment with the help of the prize money and investors. It’s business time now!

How far down the road are you with your new sheep milking business venture?

I have done all the financial costings and there are some big financial costs to begin with, so I need help from investors to get the business off the ground. I have someone that is potentially interested already. My godfather Bill Pearce has also given me the permission to put in a cheese making unit into an industrial unit he owns.

Where do you see yourself in 10 years’ time?

All I want is security and to buy my own farm. Hopefully my sheep milking business will be a success.

How did you find bootcamp?

Bootcamp was a life-changing experience and has enabled me to learn more about myself and develop new skills. It taught me that I have got to believe in myself a lot more, be more confident, not to be too hard on myself and not to be scared to ask for advice and use advice out there.

Did you feel like you could win it during the week?

After putting myself forward as team leader in the gross margins task at Anglia Farmers and winning the task, I felt like I was back in the game and it was a level playing field. If there was anyone I thought could have won, it was Charlotte Foxall. She was good all round and really knew her stuff.

You are not from a farming background, what made you want to get into it?

The thing that started my desire to farm was when my mum and dad bought me a Britain’s farm set when I was four-years-old, I knew then it was what I wanted to do.

There is farming in our blood too. Although my dad didn’t farm, my great granddad was in farming.  But when his eldest son went off to fight in World War Two, he was killed in action. My Great Granddad never came to terms with it as everywhere on the farm reminded him of his son. So the farm was sold.

How did you get into farming?

My aunty and uncle Christine and Michael Weaver live on an old dairy farm and run a suckler beef and arable operation, so from a young age I used to go and help out. Then when I was about 10, I went to the Great Somerford Show and there were some chickens for sale. Mum wanted chickens too, so we bought three chickens and I sold eggs at the front gate.

With the egg sales I gradually bought 150 laying birds and 50 chickens that were traditional breeds. I was taught to pluck and dress chickens by local farmer Ken Spreadbury. Ken was my first mentor and he was the person that got me into farming.

Then when I was about 14, Ken gave me the opportunity to buy some sheep. He let me 1ha and I put them to the ram. For my 14th birthday present my aunty and uncle gave me an Aberdeen Angus heifer calf. I then slowly built up numbers, and for my Christmas present that year I got two Gloucester Old Spot pigs.

I then went on to buy 150 laying birds all at once. I would the sell the chicken manure and dad would give me the cuttings from his clock making business to sell as kindling. I was always reinvesting the money.

Also when I was 14, I spent all my savings on buying eight pedigree Suffolk ewes and never got one lamb out of them. I slowly learnt from my mistakes and sold the Suffolk ewes.

The turning point came when I was 15-years-old and bought 30 Lleyns and two tups. At the same time a letter from the MOD came through the post stating they were looking for a tenant. My dad and I went to see the land agent in our Morris 1000 and we knew we would be competing against the big boys.

What the judges thought of Will

Jane King
Will was the dark horse of the competition. Although he has a quiet way about him, he had a lot of valuable input and a natural leadership style. But what really set him apart from the other candidates was his ability to listen to everyone’s points and evaluate the situation before forming his own opinion.

Richard Price
It was a close competition right to the end, but what really made Will stand out from the others was his generosity in helping others develop and the way he led others. Although a lot of the tasks were arable based and weren’t his strong skill, he still mucked in, helped lead teams and also helped bring others along with him.

Will Gemmill
Will may not have been born into farming, but he has a real drive and passion to achieve something big. Will’s business pitch was well considered; he had done a lot of research and had really thought about all aspects of the business. It’s encouraging to see he is now wishing to take forward his business pitch idea.

My dad explained to the senior land agent what I was trying to do, but I was too young for a contract, so I went into partnership with my dad. On 22nd December my dad came and told me that we had won the tenancy and I just cried as I didn’t think we would stand a chance.

What are you farming now?

We now farm 64ha of organic improved scrub land (50ha of which is MOD land). We also have 66ha of permanent pasture which is conventional.  Most of the MOD land is in the “danger zone”, so we graze around the ranges.

As part of the MOD agreement we had to buy some cows, so we have a total of 19 Herefords and two bulls on hire.

We have also got 270 ewes (110 organic Lleyns, 80 Mules, 80 Texel x Mules). We converted half of the flock and land to organic as we can’t reseed or plough the improved scrub land so we had to come up with a way of increasing income somehow, so we went into HLS organic.

What would your advice be for anyone wishing to get into farming?

My advice would be to ring up local farmers in the area and get work experience. I went to work for a farmer called Martin Brown. I worked there for 18 months and my confidence grew.

Also use the information out there. I learnt how to shear from youtube. At first it took me a week to sheer eight sheep, but I slowly picked it up. I later entered the NSA Student Shepherd of the Year competition and won that in 2012. That really boosted my confidence.

I also went on a shearing course with the British Wool Board and the instructor was a guy called Andrew Wear. He ended up becoming my latest mentor and has been my mentor for three years.

He farms 900 ewes in the Mendips and has taught me a lot about sheep. If it wasn’t for Andrew and his partner Jen I also wouldn’t have applied for the Farmers Apprentice.

What would your advice be for anyone applying?

Put yourself out there and show your true colours. You don’t have to be from a farming background to apply, look at George Brown [2012 Farmers Apprentice winner] and I, we’ve both come from nothing and look where we are now.

Watch the 2014 series of the Farmers Apprentice