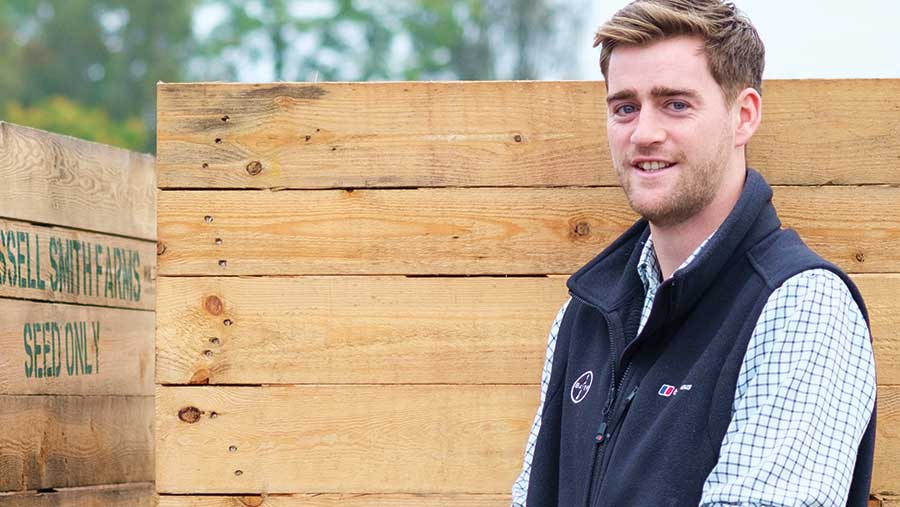 Employers in the agricultural sector are looking to recruit a wider range of candidates than you might expect.

Jack Hill is proof that you can forge a career in the agriculture sector without coming from a farming family.

The 27-year-old has recently been appointed a commercial technical manager for Bayer CropScience and is excited about the prospects that lie ahead.

His job is to advise farmers and agronomists across Norfolk about the company’s portfolio of products and services.

Jack says his current job is rewarding in that no two days are the same and he has no idea what question he might be asked.

He also enjoys working with the farming community and the balance of office-based work and getting out and about on business.

Route into the job

Jack fell in love with farming

With no connection to farming, Jack’s journey into agriculture started by chance.

At university he studied a geography degree and, at a friend’s suggestion, began working in the summer holidays at a local agrochemical research station.

He worked there during the holidays for the next four years.

After graduation he decided to go travelling to Australia and made the bold step of applying to work on a farm in New South Wales without having ever driven a tractor.

It proved to be a life-changing decision.

“I stayed for a couple of harvest seasons and fell in love with farming,” he says.

“It was a baptism of fire, but I really enjoyed it. When I came back to the UK I narrowed my job search. I knew agriculture was something that I would enjoy and be passionate about.”

He was a little older than most other candidates, so instead of offering him a place on the two-year graduate scheme, the company put him through a fast-track training programme for a field role.

The biggest hurdle for Jack was to get the agronomy and crop protection knowledge required – and as quickly as possible.

He admits that when he started in June 2014, his level of knowledge was relatively low, but in just six months he had gained his Basis qualification.

“I had really comprehensive training to give me the best possible chance,” he says. “It was a steep learning curve, but my brain was just like a sponge.”

With the qualification under his belt, Jack started shadowing the man he would be replacing, who had decided to retire after 35 years in the job.

After a four-month transition, Jack took up the position he now holds.

How many people does the company employ?

What are the key recruitment areas?

The company recruits across the spectrum – from sales and marketing, to product development, including field trials, and regulatory affairs. There are roles within logistics management, finance and other vital support functions.

No. Many successful applicants have a degree, but it recruits people with farming qualifications and those with no prior agricultural knowledge.

The commercial training programme has been running for five years. Trainees undertake a two-year programme that includes placements across the business functions, including an overseas secondment and experience with a customer. It takes one to two people each year.

Where can people find out more details of the scheme?

For more information go to www.bayercropscience.co.uk/about-us/commercial-training-programme.